The true dimensions of the Egyptian crisis


I've noticed that many US commentators and observers have limited their discussion of the present crisis in Egypt to those dimensions that involve or affect the USA. It's a far more critical issue than that. Egypt might go the same way as Iran in 1979. All the necessary factors are there and in play.

The international aspects of the Egyptian crisis, in combination, could - quite literally - trigger World War III. Let me explain.

Egypt is the last link in a chain of political and religious extremism. Let's follow that chain:

Israel now finds itself in the extraordinarily dangerous position of having avowed enemies, both political and (fundamentalist) religious, far to the East (Iran); to its north-east (Syria); north (Lebanon); south-west (Gaza); and possibly to the south (Egypt) if the Muslim Brotherhood or its allies take control there. Furthermore, to the east is an unstable, unpredictable and politically (if not militarily) hostile Palestinian government in the West Bank. 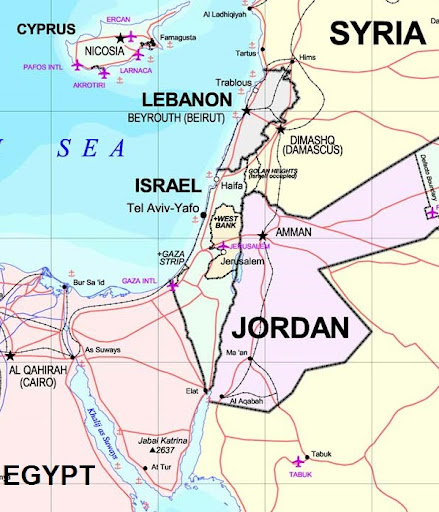 Put those elements together, and what do you have?

You have a paranoid nuclear power that's surrounded by enemies, and is determined that the Holocaust shall never be repeated.

Remember that, upon graduation from basic training, Israel's soldiers swear an oath: "Masada shall not fall again!"

Given that reality, just what do you think Israel, right now, is considering doing about the threats facing it?

If your answer was "Go to the synagogue, form a minyan, and pray about it", there's a bridge in Brooklyn, NYC I'd like to sell you. Cash only, please, and in small bills.

Furthermore, Israel considers the United States' reaction to the crisis in Egypt to be nothing more or less than a double betrayal: betrayal of the USA's only real ally in the Arab world, and betrayal of Israel, which depends on Egypt to keep the Camp David Accords (which will almost certainly be abrogated if a Muslim fundamentalist government takes over that country).

Political commentators expressed shock at how the United States as well as its major European allies appeared to be ready to dump a staunch strategic ally of three decades, simply to conform to the current ideology of political correctness.

One comment by Aviad Pohoryles in the daily Maariv was entitled 'A Bullet in the Back from Uncle Sam'. It accused Obama and his Secretary of State Hillary Clinton of pursuing a naive, smug, and insular diplomacy heedless of the risks.

Who is advising them, he asked, "to fuel the mob raging in the streets of Egypt and to demand the head of the person who five minutes ago was the bold ally of the president - an almost lone voice of sanity in a Middle East?"

"The politically correct diplomacy of American presidents throughout the generations ... is painfully naive."

Obama on Sunday called for an "orderly transition" to democracy in Egypt, stopping short of calling on Mubarak to step down, but signaling that his days may be numbered.

Netanyahu instructed Israeli ambassadors in a dozen key capitals over the weekend to impress on host governments that Egypt’s stability is paramount, official sources said.

"Jordan and Saudi Arabia see the reactions in the West, how everyone is abandoning Mubarak, and this will have very serious implications," Haaretz daily quoted one official as saying.

"The question is, do we think Obama is reliable or not," said an Israeli official, who declined to be named. "Right now it doesn’t look so. That is a question resonating across the region not just in Israel."

"Throughout Asia, Africa and South America, leaders are now looking at what is going on between Washington and Cairo. Everyone grasps the message: 'America’s word is worthless - America has lost it'."

If the United States, the world's only remaining superpower, is widely regarded as having 'lost it', as no longer having the political will or the nerve to intervene in a crisis to ease tensions and restore order . . . that means the nations involved will act in their own best interests, without any restraint. After all, their security can now only be guaranteed by their own actions, their own strength.

(You might also wish to consider that US economic and political policies are directly responsible, to a very large extent, for the current mess in the Middle East. The inimitable Karl Denninger has the scoop on that. Go read.)

Here's how the conflict may begin and develop.

Ever heard of something called 'Armageddon'?

Are you worried yet?

The whole situation reminds me of the Sorcerer's Apprentice sequence in Fantasia...

Holding the Bible in one hand and the newspaper in the other is quite interesting nowadays. Those prophets of old were proven correct in the short term, and I believe their long term prophecies are starting to shape up as well....

Interesting times to be alive, for sure and for certain.

Linked back from Silicon Graybeard.

Who says the fundies will get the power? Certainly they'll try... but they're* A) a small minority and B) unsupported and virtually unknown to the masses.

*They as in the muslim brotherhood

And egypt depends too much on tourism and trade for the people to go all jihadi, it's bad for business. I expect any powergrab by the brotherhood is going to get firmly squashed by more pragmatic people.

Small correction after reading up: Ok not small minority, sizable minority. They got the support of 20% of the people back in the 2005 parliament elections.

Still, I don't expect them to suddenly gain control of the country.

I hope the Egyptians as a whole are as rational as Mikael believes. One need only look to our own history, though, to see that a sizable minority, well organized, can drag the rest of the populace behind it, especially in times of uncertainty.