Another prison guard has been killed in the line of duty.

A corrections officer who had raised concerns about being the sole guard in the chapel of a Washington state prison was strangled there over the weekend, and an inmate serving a life sentence is the primary suspect, authorities said Sunday. 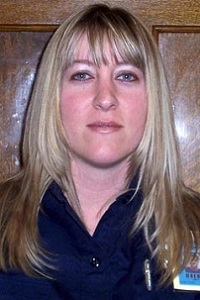 Jayme Biendl, 34, was found dead Saturday night in the chapel at Monroe Correctional Complex about 30 miles northeast of Seattle, Department of Corrections spokesman Chad Lewis said. She had been strangled with a microphone cord.

The inmate, Byron Scherf, 52, was reported missing during a routine count at 9:14 p.m. Saturday. He was found three minutes later in the chapel lobby and told officers he had planned to escape.

Teamsters 117 spokeswoman Tracey Thompson said Sunday that the officer had complained to her union shop steward and prison supervisors about being the sole guard working in the chapel. She worried about being there alone without anyone checking on her, Thompson said.

Recent budget cuts have forced staffing reductions and union members have been worried about the impact of those reductions on safety, Thompson said.

"We have been pushing so hard on safety issues," Thompson said. "It makes me crazy that it took someone getting murdered inside a prison while doing their job for there to be attention on this work and how difficult and dangerous it can be."

As a former (retired) prison chaplain, I'm profoundly saddened to learn this news . . . and also very angry. The union spokesperson quoted above is absolutely correct. Across the country, budget cuts are placing corrections staff in greater danger from inmates. I hear about it from former colleagues on a regular basis. Some of them have been forced by their spouses to find a different line of work . . . and I don't blame their spouses at all!

The United States incarcerates a greater proportion of its population than any other nation on Earth - and then begrudges the money needed to safely confine them, with adequate staff to ensure their own security as well as that of society. This sort of tragedy is the result.

When will we learn that if you want to call the tune (i.e. incarcerate large numbers of people), you have to pay the piper (i.e. budget the necessary funds to keep them behind bars, and ensure the safety of those who keep them there)?

May Ms. Biendl rest in peace . . . and may this tragedy force all Americans to re-examine the reality of our prisons, financially and otherwise.

with all respect to Mrs. Biendl and her family... where is this money you seem to be asking for going to be coming from? You've talked at great length about the budget crisis yourself.

Honest question - you're the one who's been involved with that prison system for years. What's your answer, beyond "there's not enough money, we need more?" 'Cause no disrespect intended - everyone's singing that tune, and lots of folks with good reason.

Further, it's going to get louder all around, as you well know - and I daresay the WA State prison system won't be the only place able to show a body count in the coming years to buttress their case.

So what answers can you suggest?

That's the point, Jenny. There isn't enough money to incarcerate safely the number of people the USA currently incarcerates. That means either finding more money (which isn't going to happen), or reducing the number of people behind bars. That, in turn, means changing the things we classify as crimes (including the War On Some Drugs, things like that).

Economics will force this on us, if nothing else will.

So... in your opinion, having worked in the system - what proportion of people presently incarcerated could be safely released from the justice system tomorrow?

Failing that, what proportion of incoming inmates shouldn't be coming in at all?

I'm not trying to pick on you here - I just want to get a better scope of the problem. It's easy to say "end the WoD" (and I'm honestly rather sympathetic).... but I want to know, generally speaking - how much is *really* going to be saved by legalizing pot, for instance? 5%? 50%? How many of your incoming "class" are otherwise harmless, and how many are the types that *are* dangerous to their fellow man, whether drugs are legal or not? Because unless you say *everything* is legal, then where ever you draw a line, *something* is going to be a black market.

Honestly, I'm open to hearing anything... recommend anything from complete "anything goes" to volunteer deputized vigilance committees and caning in the town square, I don't care.

But with a very limited budget and fallen humanity - what do you do? You're the one who's worked in the system and knows the character of the people involved.

What do you think will realistically protect the rest of us... that we can actually sustainably afford?

In a nutshell, if someone is convicted of a violent crime, he/she needs to be behind bars. Period.

If someone is a sex offender (a REAL sex offender, not merely guilty of a statutory offense like a 16-year-old boy sleeping with his 15-year-old girlfriend), he/she needs to be behind bars. Period.

If someone's crime or conduct poses a threat to society (e.g. a driver under the influence of drugs or alcohol, someone who's violent when drunk or drugged, that sort of thing), and there's no way to prevent them from behaving like that, they need to be behind bars. Period.

Outside those categories . . . your guess is as good as mine. If they pose no threat to society, wouldn't they be better off being sentenced to a hefty restitution, and being forced to work to pay it off? Wouldn't that be more productive for all concerned?

I can't go into all the ramifications in a short blog article. If I can find a publisher for my prison memoir, there are a couple of chapters in it that address this issue.

Hope this helps explain my perspective a little better.

All that makes sense.

But again - to how many people presently in the system does that apply?

If we're talking, say.. half - absolutely, cutting down on the numbers entering the prison system by changing the penal code makes a lot of sense.

But if most of the people there really are hazards - if by making the changes you mention we only cut say... 5% or so of the prison population - then we have a much bigger problem, and not one easily solved at the "which things are illegal" end of the process.

So - of those presently incarcerated, in your experience roughly what proportion present a hazard to the populace at large?

(BTW, I hope that didn't come across as a challenge - I didn't mean it to at all. At risk of sounding Socratic (ugh) - I truly am ignorant on that question, and would like to know the answer from a subject matter expert. And you is. :)

I am in general sympathy with your point, but annoyed by the assertion that the United States incarcerates a larger portion of its population than any other nation in history. I find this unlikely in the extreme (North Korea could reasonably be said to keep its entire population incarcerated) and it calls your whole argument into question.

Great discussion! The potential methods of restitution for non-violent offenders are endless. So many of these people have the potential to learn responsibility; instead, we send them to prison where they learn to be "better" criminals. It's in everybody's interest to change this horribly broken system.

Given all the interest in this topic, let me address it in a series of blog posts. It's too complicated to tackle as a short comment to another blog post.

Jenny, just to look at a few things at random:
Federal prisoners in 2009 numbered 187,886; of that, 95,205 had a drug offense as their most serious offence--a bit over half. Another 65,678 were "public order," including immigration and weapons-related charges. Since there's a category for violence, and these weapons-related charges aren't listed under it, it's probably a reasonable assumption that they are mere possession or paperwork charges, neither of which caused anybody actual harm (else they'd be listed under violent crimes).

Looking only at federal prisoners is going to be misleading, because such crimes as murder are rarely a federal matter. We need to also look at state data (which would comprise the bulk of the prison population anyway) to get an accurate picture. I'm poking around for those statistics, but I'm having trouble finding them. The FBI's Uniform Crime Reports don't seem to have a category for drug crimes. I'm hoping Peter can come up with some state-level data.

Good idea to address this with further blog posts Peter. I came here to suggest further discussion along those lines. The USA criminal justice system is a mess and needs fundamental reform but mindless demagogues and politicians stand in the way. The so called "War on drugs" is a major cause for prison overcrowding and addressing this would be a good first step. Prison is not always the answer and in fact often makes people worse. we have known all these things for many years now. No one seems to care.