Have you ever wanted to glow in the dark?


If so, you might want to visit the Gippsland Lakes in Victoria, Australia. The Daily Mail reports:

Swimming is supposed to give you a healthy glow, but these swimmers weren't quite sure what was going on when they took a late-night dip and turned a fluorescent shade of blue.

'It was like we were playing with radioactive paint,' said photographer Phil Hart who snapped the bizarre sight as his friends emerged from a lake in the dark of night. 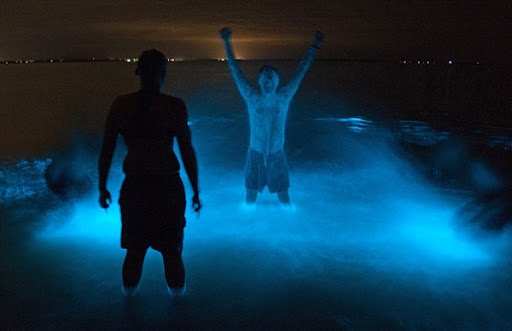 The light is created by a chemical reaction called bioluminescence, which happens when a naturally-occuring micro-organism in the water is disturbed.

Phil, 34, put his camera on a very slow shutter speed and threw sand and stones into the water to cause the reaction and capture as much of the blue haze as possible.

These images are particularly stunning because the concentration of the micro-organism 'Noctiluca Scintillans' was abnormally high when he took the photos at Gippsland Lakes in Victoria, Australia.

It is believed the combination of bushfires and floods created the high levels of nutrients in the lakes for the organisms to feed.

'It may not happen again in my lifetime,' said Phil. 'I feel fortunate to have been there to see it and to have had my camera gear there to record it.' There's more at the link, including several more photographs (all larger than the reduced-size reproductions above). Highly recommended viewing for those interested in either biology or photography - or just wanting to glow in the dark!