The world's most iconic warship is falling apart


The Telegraph reports that HMS Victory is in grave danger of collapsing under her own weight.

As Britain's most celebrated warship, she withstood the onslaught of the combined French and Spanish navies at the Battle of Trafalgar. But HMS Victory, the flagship of Lord Nelson, now faces its ultimate battle. 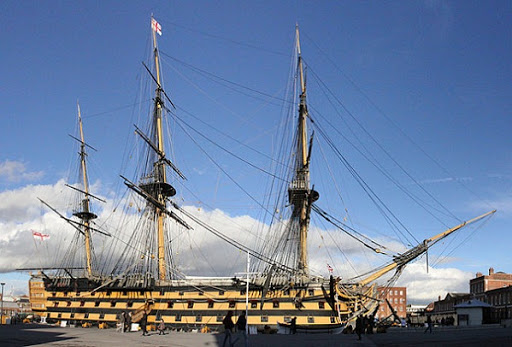 The 245-year-old ship is leaking, is riddled with rot and is gradually being pulled apart by its own weight, according to maintenance documents and a structural survey obtained by The Sunday Telegraph.

Much-needed repairs have not been carried out and previous renovation work may have even damaged the HMS Victory's structural integrity.

The ship faces an uncertain fate, with the government looking to cut funding for her and considering handing over the running of her.

Campaigners fear it could be "offloaded" to the local council, a private company or to a charity, who would not have the funds to preserve the warship.

The reports have been compiled in recent months following surveys of the vessel.

One details how the vessel is being gradually pulled apart by its own weight, because it is not adequately supported by the cradle built for it in Portsmouth's naval dockyard.

It is sitting in a dry dock meaning that there is no water around the vessel to support its bottom and sides. Instead, the weight of the vessel is pushing the sides out. 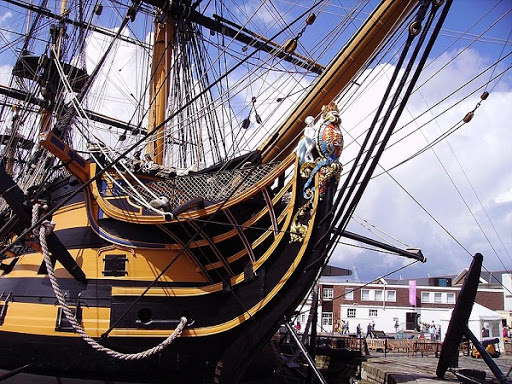 Bow and figurehead of HMS Victory (image courtesy of Wikipedia)

A second report reveals widespread problems with rain water entering the vessel, leading to extensive wood rot. The water is also thought to have worsened the structural problems.

The document states that there were even reports of water leaking into the cabin used by Thomas Hardy, who captained the ship at the Battle of Trafalgar and was with Lord Nelson as he died on board from wounds inflicted in the fighting by a French sharpshooter.

Despite several reports of leaks and the damage caused by the water, the report states: "very little work has been requested and approved to alleviate this problem".

In the report, officials admit that they do not even know the sources of some of the major leaks. 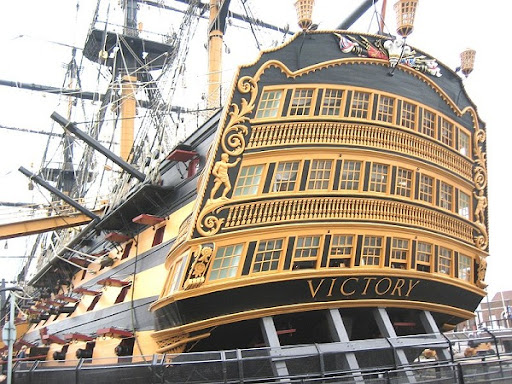 Although more than 350,000 people visit the ship every year, HMS Victory remains a serving, commissioned warship and its basic £1.5 million a year maintenance costs are paid for out of the defence budget.

A spokesman for the MoD insisted that it will not sell off the Victory, but campaigners fear the running of it will be taken over by a charity – such as the Mary Rose Trust – the local council, or a private company.

Alistair Thompson, deputy leader of the opposition Conservative group on Portsmouth council and leader of a local campaign in support of the warship, warned: "We will lose part of the tradition and that the ship will no longer be maintained to the standard it should be."

Admiral the Lord Boyce, a former First Sea Lord and chief of the defence staff, said: "The important thing is that HMS Victory remains.

"She is absolutely iconic, a living, visible memory of Pax Britannica and how this country gained its great wealth through its maritime trade, as a result of the ruling of the waves by the Royal Navy. It absolutely captures that place in our history."

I'm very disturbed to read of this development. HMS Victory is the only ship of the line from the era of the Napoleonic Wars still preserved. Aboard her, visitors can see for themselves how the great naval battles of that period of history were fought, and how sailors lived. She's absolutely irreplaceable as a piece of maritime history, the only vessel of her kind in the world today, to say nothing of her profound importance to English and British military history in particular.

I hope she can be saved. The world would be very much the poorer if she were allowed to deteriorate further, and collapse from neglect.

Concur- We went through this with the USS Constitution a few years ago, but it was hauled and fully reconditioned...

I'm an American. I have been on her - though my memories are a tad fuzzy now. The smell of the ship is an echo in the back of my nose. She needs to be maintained, please lord someone take up the challenge.

That's really a bummer. Skip buying just one fighter jet, guys, and preserve something worth preserving.