I didn't spot this report before Christmas, but it's fun enough that I thought it was worth mentioning it belatedly.

The USS George H. W. Bush is the tenth and last Nimitz class aircraft carrier in the US Navy. She was completed in 2009. Here she's turning hard to port during her trials, showing a spectacular list to starboard. 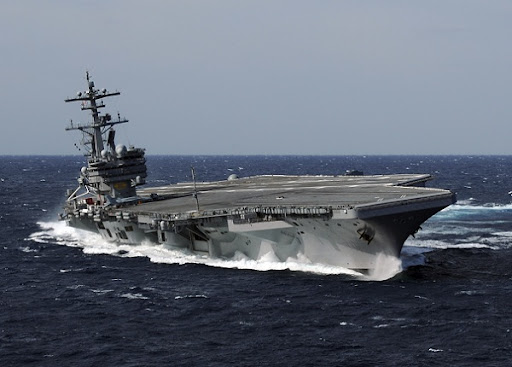 She celebrated Christmas with a rather spectacular display of lights. The US Navy's Web site reports: 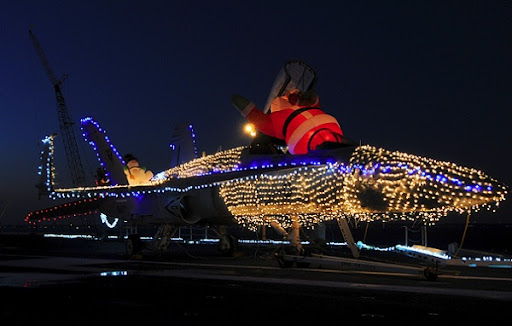 "This was a whole command effort," Haynie said. "Every department has been absolutely involved in this, from electricians who ensure electrical safety, Supply [department personnel] who coordinated the ordering and receiving all the decorations, to Navigation and Air [departments] who helped hang the lights. There is no one department that is not involved in some way."

The decorating began while Bush was at sea and included the construction of a 25 foot wreath, and an 8 foot by 6 foot Santa sleigh painted with flames and strung with holiday lights. The ship's F/A-18 trainer jet, which served in place of Santa's reindeer, was wrapped in white net lights and then outlined in blue lights, and large cardboard storage containers were painted to look like presents.

All of the lights are LED with total lumens of more than 4.5 million.

"We are lit up like the 'Griswalds'," said Aviation Ordnanceman 1st Class (AW/SW) Donnie Dowell, FCPOA president. "People will be blinded with the 6.2 miles of lights."

I can only guess at the amount of work involved in stringing 6.2 miles of lights. That's a labor of love, all right - or an inordinate amount of Navy-style 'volunteering'! I'm sure many of my veteran readers will know all about the perils of 'volunteering' . . .

"Attention! Anyone here know how to play the piano?"

"Right! You two, go clean out the officers' toilets!"

Favorite nephew calls it being "volentold."