Would you believe that Genghis Khan reduced global warming?


No, I'm not making it up - although over-enthusiastic 'green' researchers might have that problem! Mongabay.com reports:

In 1206 AD Genghis Khan began the Mongol invasion: a horse-crazed bow-wielding military force that swept through much of modern-day Asia into the Middle East and Eastern Europe. But aside from creating the world's largest empire, the Mongol invasion had another global impact that has remained hidden in history according to new research by Julia Pongratz of the Carnegie Institution's Department of Global Ecology. Genghis Khan and his empire, which lasted nearly two centuries, actually cooled the Earth. 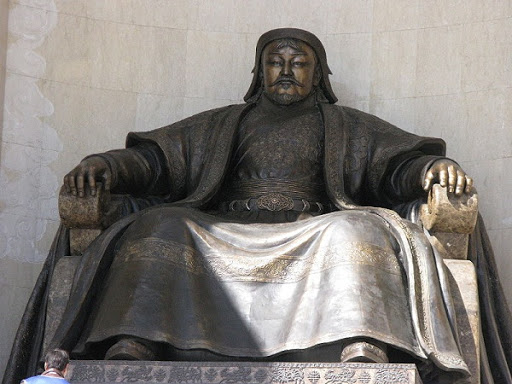 "It's a common misconception that the human impact on climate began with the large-scale burning of coal and oil in the industrial era," says Pongratz, lead author of the study in a press release. "Actually, humans started to influence the environment thousands of years ago by changing the vegetation cover of the Earth‘s landscapes when we cleared forests for agriculture."

The answer to how this happened can be told in one word: reforestation. When the Mongol hordes invaded Asia, the Middle East, and Europe they left behind a massive body count, depopulating many regions. With less people, large swathes of cultivated fields eventually returned to forests, absorbing carbon dioxide from the atmosphere.

"We found that during the short events such as the Black Death and the Ming Dynasty collapse, the forest re-growth wasn't enough to overcome the emissions from decaying material in the soil," explains Pongratz. "But during the longer-lasting ones like the Mongol invasion and the conquest of the Americas there was enough time for the forests to re-grow and absorb significant amounts of carbon." 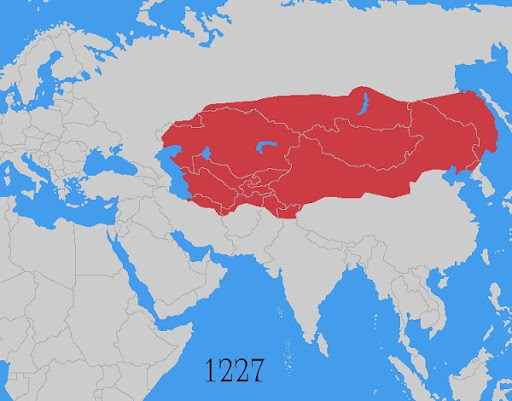 Mongol Empire in 1227 AD, at the time of Genghis Khan's death
(Image courtesy of Wikipedia)

The Mongol invasion had the most significant impact. According to the study's accounting, re-growth of forests during the Mongol invasion absorbed 700 million tons of carbon from the atmosphere, equaling the amount of carbon global society now produces annually from gasoline.

Am I to understand that if we repeat the Mongol Invasions, we'll repeat their benefits in terms of global warming? I don't know whether that would give us a cooler environment, but it certainly promises to be a target-rich one!

Greetings from Texas,
Sooo, long term mass murder is one way to go green? That was my guess as soon as I saw the title. With some of the Duffi we have out there this could be a dangerious thing to post.

Well, he KILLED enough people to slow global warming... And afterwards he turned areas into a wasteland... And we want to repeat that??? Is that REALLY a good idea???
/snark off

Little-reported but debated and related: the same thing probably happened in South America when the Conquistadors came. The old-growth rainforest we know may be the result of massive native die-off...

I have maintained that if someone is TRULY interested in the green philosophy, they will commit pest-aside as soon as possible.

But they are only interested in making others go "green", to exert control over someone else. Like the past speaker of the house. Her green project cost more money than the old way of doing things.

Which explains why Bill Ayers - and his friends in the white house - get along so well with the Greenies. They both have no problem with killing 25 or 50 million people.