The BBC reports that they do indeed!

A space telescope has accidentally spotted thunderstorms on Earth producing beams of antimatter.

Such storms have long been known to give rise to fleeting sparks of light called terrestrial gamma-ray flashes.

But results from the Fermi telescope show they also give out streams of electrons and their antimatter counterparts, positrons.

The surprise result was presented by researchers at the American Astronomical Society meeting in the US.

It deepens a mystery about terrestrial gamma-ray flashes, or TGFs - sparks of light that are estimated to occur 500 times a day in thunderstorms on Earth. They are a complex interplay of light and matter whose origin is poorly understood.

Electrons in storm regions are accelerated by the fields, reaching speeds near that of light and emitting high-energy light rays - gamma rays - as they are deflected by atoms and molecules they encounter.

These flashes are intense - for a thousandth of a second, they can produce as many charged particles from one flash as are passing through the entire Earth's atmosphere from all other processes. 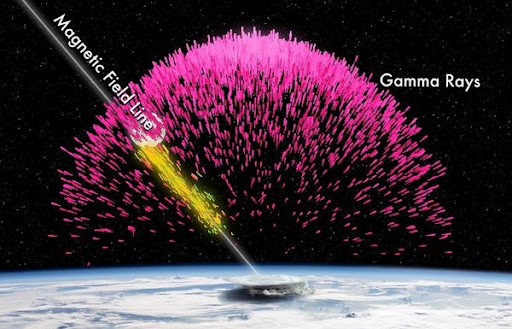 "We expected to see TGFs; they had been seen by the GBM's predecessor," Dr McEnery explained.

"But what absolutely intrigues us is the discovery that TGFs produce not just gamma rays but also produce positrons, the antimatter equivalent to electrons."

When gamma rays pass near the nuclei of atoms, they can turn their energy into two particles: an electron-positron pair.

Because electrons and positrons are charged, they align along the Earth's magnetic field lines and can travel vast distances, gathered into tightly focused beams of matter and antimatter heading in opposite directions.

The dance of light and matter continues when positrons encounter electrons again; they recombine and produce a flash of light of a precise and characteristic colour.

It is this colour of light, picked up by the Fermi's GBM, that is a giveaway that antimatter has been produced.

The magnetic field can transport the particles vast distances before this characteristic flash, and one of the Fermi detections was from a storm that was happening completely beyond the horizon.

There's more at the link. National Geographic also has a very interesting article about the phenomenon.

Trust Mother Nature to come up with yet another way to put us in our place! Scientists running all over the place, trying to locate and study antimatter in the universe . . . and we find it's being generated right under our noses, every time there's a thunderstorm! Tends to put our scientific efforts into perspective, doesn't it?