In memoriam: Paul the psychic octopus


Last year I wrote about Paul the octopus (the links are to 3 separate articles), who 'predicted' many of the winning teams during the World Cup competition in South Africa. Sadly, he died in October last year.

It seems that the German zoo that owned him wants to go on cashing in on his reputation. The Daily Mail reports:

The tentacled creature correctly predicted the outcome of eight matches at the 2010 World Cup, including Germany's thrashing of England and Spain's victory over the Netherlands in the final.

He cost bookmakers thousands after floating languidly towards boxes of mussels draped in the colours of competing teams in the South African tournament last year. 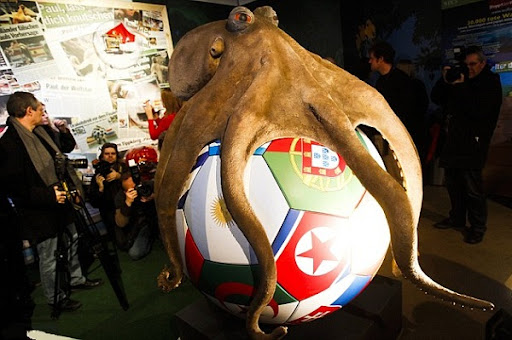 The aquarium where Paul lived first mooted the idea of erecting a memorial to the octopus after his death last year and now the soothsayer's legacy has been enshrined with the permanent monument.

The statue is around 1.80 metres [6 feet] high with Paul straddled on top of a football, with a see-through window displaying a goden urn containing the octopus's ashes.

There's more at the link. Here's a video report on the unveiling of the memorial.

Hmm . . . I note that Paul was a Common Octopus, known in Latin as Octopus Vulgaris. Dare I say that his memorial certainly lives up to the second word of his Latin classification?