Why entitlement programs MUST be cut


Yesterday I mentioned the spending cuts proposed by the GOP in the House of Representatives. I said at the time:

I note that they haven't touched entitlement programs yet - and they've got to touch those programs, because there's simply no money available to pay for their ever-burgeoning expenditures. I hope they have the political courage to do so, because if they don't, we're screwed.

Today, a report on CNN's Web site illustrates precisely why I said that. It's the clearest exposition I've yet seen on how entitlement programs are driving US government expenditure over the financial cliff. Here's an extract.

Today, the United States spends roughly 76 cents of every federal tax dollar on just four things: Medicare, Medicaid, Social Security and interest on the $14 trillion debt. That leaves 24 cents of revenue to pay for everything else the federal government does.

That's not a lot. But it's a mint compared to what could be left over by 2020, according to a simulation made by the Government Accountability Office.

Barring serious efforts to curb the growth in the country's debt, by 2020 Washington could be spending 92 cents of every tax dollar on Medicare, Medicaid, Social Security and interest alone. That would leave just 8 cents to pay for everything else. 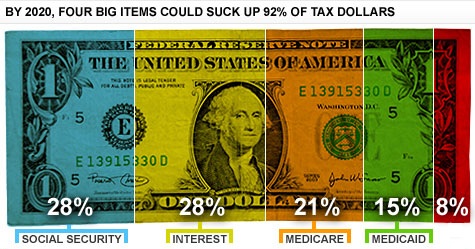 Beyond 2020, the 8 cents to pay for "everything else" would get whittled down to zero. By 2040, there would only be enough in federal tax revenue to pay for interest on the debt and Social Security, according to Susan Irving, GAO's director of federal budget analysis.

Sure, the country could try to borrow to pay for what revenue can't cover. But given the magnitude of what would have to be borrowed, the interest costs alone would be prohibitive. Another alternative: the government could abruptly raise taxes sky high and cut spending to the bone.

This is just one reason why the country's fiscal course is often described as "unsustainable".

There's more at the link, including a larger, more detailed version of the image above. It's essential reading for anyone wanting to understand the financial peril in which this nation stands. Sincere thanks to CNN for publishing it, and helping to make the situation that much clearer.

I don't consider Social Security to be an entitlement program. I've paid into SS every year for the last 42 years and will continue to do so for about another 9. It is a retirement plan forced upon me. I do agree there are many entitlement program that need to go.

A while back I saw a chart on the Internet. I don't have any idea if it is accurate. The chart presented the medical costs over about a 10 year period. Cost were relatively flat until the 1960's when Medicare was enacted - then the line shot up on a diagonal. The Federal Government is more than capable of messing up anything!

I suspect that one's view of whether Social Security is an entitlement or not has some relation to where you are on the retirement spectrum. I do consider it an entitlement, and my 14 years of contributions to be a complete and total waste.

If I were to become disabled and unable to work tomorrow, I would be able to cash-in on my Social Security benefits for the rest of my live, which quite likely would still be 30-50 years, taking out vastly more than I ever put in to the system.

Conversely, if I am able to work another 37 years until I hit the age to receive the full benefit of my "contributions", well, at this point it's highly unlikely that I'll be receiving anything, since the system will have been bankrupt for over a decade beforehand.

At least for this year, we got a 2% cut in our rate of forced contribution. That 2% went directly into my 401(k) account, where it at least has some chance of still existing when I'm ready to retire.