A trooper in the Australian Special Air Service Regiment (SAS) is to be awarded the Victoria Cross for Australia on Sunday. It's that country's highest honor for valor in action, equivalent to the British Victoria Cross or the US Medal of Honor. Like all SAS troopers, for security reasons his name has not been released; he's referred to simply as 'Corporal Ben', or by the initials 'RS'. He's shown below in 2006, with his back to the camera, receiving an earlier award, the Medal for Gallantry (equivalent to the UK Military Cross or the US Silver Star). 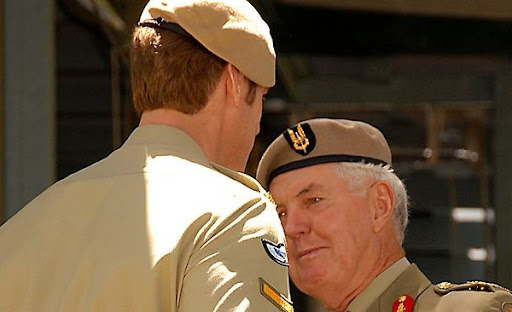 An Australian newspaper report suggests that he's a real ball of fire.

It was October 2010, at the height of the Afghanistan fighting season, and a large Taliban force had established numerous firing positions around heavy machineguns.

More than 24 elite Perth-based Diggers from the Special Air Service Regiment were under withering fire.

Realising his mates were in grave danger, and with no regard for his own welfare, the SAS Corporal charged headlong into the Taliban machinegun fire.

The sight of the 202 cm [6 feet 7½ inches] Australian warrior coming at them must have shocked the bearded Afghans.

A man mountain of a West Australian called Ben, or "RS" to his mates, had taken out three machinegun positions single handedly. His comrades said it was the most extreme example of conspicuous gallantry since Albert Jacka VC jumped into a trench full of Turks at Gallipoli in 1915, killing seven with his rifle and bayonet.

"He just tore into the enemy," one of his mates said.

"He is the epitome of the Spartan soldier. It was only a matter of time before he would demonstrate his true ability."

"This guy is a warrior," one of his ex-colleagues said ahead of Sunday's investiture ceremony.

The battle that led to the honour came during an offensive in the Shah Wali Kot area.

Signals intelligence had intercepted enemy "chatter" about a large group of Taliban fighters moving to attack a combined force of commandos from the Sydney based 2nd Commando Regiment and the Afghan National Army.

The SAS had been mounting helicopter-borne assaults throughout the offensive, targeting Taliban commanders and bomb makers.

As soon as word came through, the troops from the squadron based at Camp Russell near Tarin Kowt immediately mounted several US Blackhawk choppers for the 15-minute flight into battle.

After landing the SAS took the fight to the enemy, but it was clear they would falter unless the machineguns were neutralised. Step forward "RS". The biggest man in the regiment by a fair margin.

"RS" joined the SASR in 2002 from the army's 3rd Battalion. He is a specialist sniper and "assaulter" and a devoted husband and father of two young daughters.

He was awarded a Medal for Gallantry in December 2006 for his courage under fire in Afghanistan's Chora Valley in the same battle in which Sergeant Matthew Locke, who was killed in action during 2007, won his MG. During that fight, according to comrades, "RS" tore a Taliban fighter off his back like an insect, stood on his throat and shot him dead.

By the time the battle was over about 60 Taliban lay dead from small arms fire, hand-to-hand combat and close air support.

"... tore a Taliban fighter off his back like an insect, stood on his throat and shot him dead" - that sounds like the kind of man you really want to have as a friend, and absolutely the worst kind to have for an enemy!

Congratulations to 'Corporal Ben' from his allies in the United States, for an honor richly deserved.

EDITED TO ADD: Subsequent newspaper reports in Australia have named 'Corporal Ben' as Corporal Ben Roberts-Smith (hence the initials 'RS' referred to above). Here's one such report, including a photograph of him from the front. Clearly the SAS has decided to relax their rule about operator anonymity in his case.

I wonder what "RS" stands for? It's probably unprintable!

Being from Perth myself I've been following this with interest. Good to see he got the award he deserves.