China has announced plans to create a city twice the size of Wales in the UK, with a population of over 40 million. The Telegraph reports:

City planners in south China have laid out an ambitious plan to merge together the nine cities that lie around the Pearl River Delta. 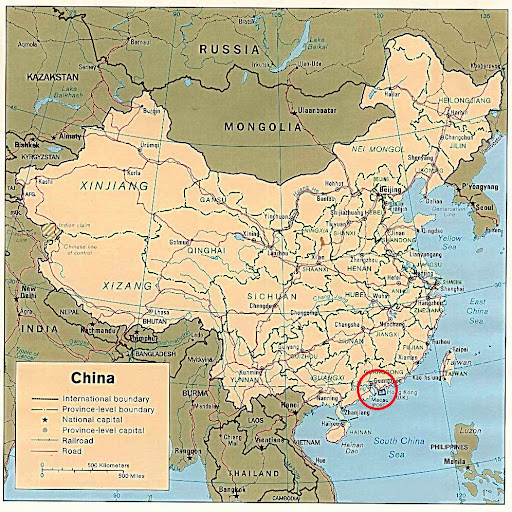 China, with Pearl River Delta circled in red (click for a larger image)

The "Turn The Pearl River Delta Into One" scheme will create a 16,000 sq mile urban area that is 26 times larger geographically than Greater London, or twice the size of Wales.

The new mega-city will cover a large part of China's manufacturing heartland, stretching from Guangzhou to Shenzhen and including Foshan, Dongguan, Zhongshan, Zhuhai, Jiangmen, Huizhou and Zhaoqing. Together, they account for nearly a tenth of the Chinese economy. 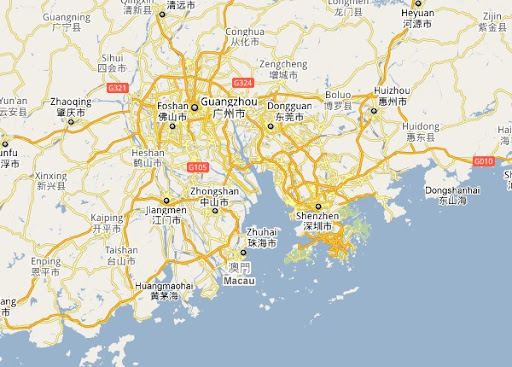 Over the next six years, around 150 major infrastructure projects will mesh the transport, energy, water and telecommunications networks of the nine cities together, at a cost of some 2 trillion yuan (£190 billion) [just over US $300 billion]. An express rail line will also connect the hub with nearby Hong Kong.

Pollution, a key problem in the Pearl River Delta because of its industrialisation, will also be addressed with a united policy, and the price of petrol and electricity could also be unified.

The southern conglomeration is intended to wrestle back a competitive advantage from the growing urban areas around Beijing and Shanghai.

By the end of the decade, China plans to move ever greater numbers into its cities, creating some city zones with 50 million to 100 million people and "small" city clusters of 10 million to 25 million.

In the north, the area around Beijing and Tianjin, two of China's most important cities, is being ringed with a network of high-speed railways that will create a super-urban area known as the Bohai Economic Rim. Its population could be as high as 260 million.

The process of merging the Bohai region has already begun with the connection of Beijing to Tianjing by a high speed railway that completes the 75 mile journey in less than half an hour, providing an axis around which to create a network of feeder cities.

As the process gathers pace, total investment in urban infrastructure over the next five years is expected to hit £685 billion [almost US $1.1 trillion], according to an estimate by the British Chamber of Commerce, with an additional £300 billion [almost US $475 billion] spend on high speed rail and £70 billion [more than US $110 billion] on urban transport.

It's an enormously impressive project . . . provided Chinese society preserves the necessary degree of stability to achieve it. There are many indications that this may not be the case.

A tip o' the hat to reader Skreidle for e-mailing me the link to the Telegraph report. Thank you, Sir!

"the price of petrol and electricity could also be unified."

It is interesting to see the language use that shows this is all centrally controlled and directed. Big Govt knows best.

China has always had trouble feeding its population. Moving people into cities will only make this worse unless they either invest heavly in commercial farming or import much more food.

Gerry hit the key point... and the area is 'effectively' already one city...

Sounds like hell to me. Albuquerque is too big for my tastes some days.