The US economy and the unfolding municipal nightmare


I've written often before about the parlous state of the US economy. It's now unraveling on a new front, one that's been under the radar for a long time, but has recently burst into prominence. That front is municipalities: cities and towns all across America that are going, or are already effectively, bankrupt.

I'm not going to write a long screed about it: I'll just point you to a number of articles from the last month or so, all of which, taken together, sum up the problem nicely.

- Municipal debt has become another financial 'bubble' - and it's about to burst;

- Demand for municipal bonds is crashing, as is their price;

- With municipal bond prices dropping, many cities can no longer afford to raise new funds through bond issues, which means their borrowing power has been cut to effectively zero; 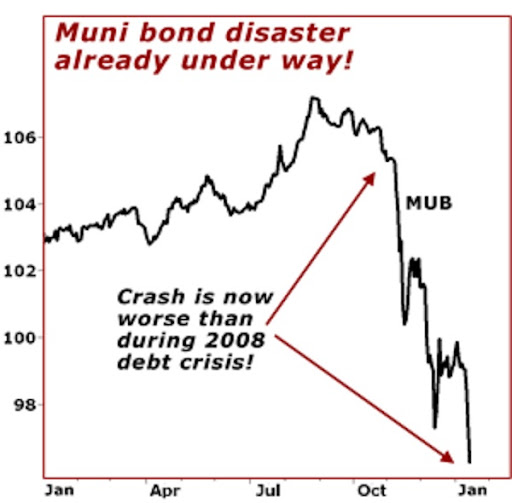 - 100 American cities owe some $2 trillion between them;

- 16 US cities may go bankrupt this year;

- Some experts think that many US cities are on the brink of financial default, and many are examining bankruptcy as a possible solution to their woes. Three cities already mentioned as likely candidates are Pritchard, Alabama; Pittsburgh, Pennsylvania; and Hamtramck, Michigan. State-level bankruptcy is even being promoted as perhaps the only way to break exorbitant contracts with unions, which are one of the primary reasons that bankruptcy threatens cities and states.

- Desperate for new sources of revenue, cities are slapping taxes on everybody and everything in sight, even those previously considered exempt.

I urge you to read the articles linked above for yourself; then, examine the financial health of your own home town. If it's as parlous as some of those mentioned above . . . you might want to move, before things get worse!

Oh - and do choose your destination city (and state, for that matter!) very carefully, won't you? Please?

My mom invested $5000 in Detroit bonds. I am hoping they are able to pay it out when it matures in May. I am not holding my breath.

Detroit thanks your mom for her charitable donation. Don't forget to claim against tax.