Today's Doofus comes from Nevada. A tip o' the hat to John Croft at Flight Global for publishing the original story.

In January last year, Earl Griffin decided to say 'hi' to a friend, who was driving an SUV on a dirt road near Crystal, Nevada. 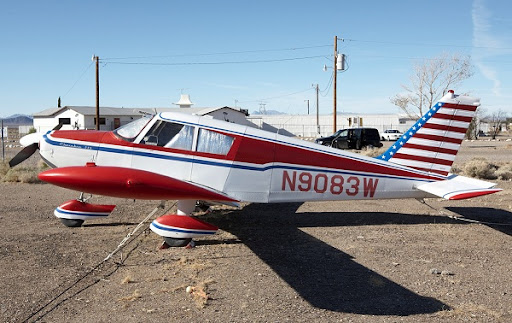 You can guess ... that the results weren't good. Luckily no one was killed.

In Earl's own words in the accident report. My comments in [...]:

"I departed BTY [Beatty Airport in Nevada] about 12:50am [he meant pm] to Crystal. I was decending [he's the bad speller, not me] to land and saw Daves car on the dirt road."

"I decided to say hellow."

Earl cranked the 235 around in a 180-deg "decinding" turn and rolled out "going toward him", he writes.

"It looked like I as going to be to low. I started recovery from the descent, the closure rate was fast."

"I hit his car with my left main landing gear". [Ouch] 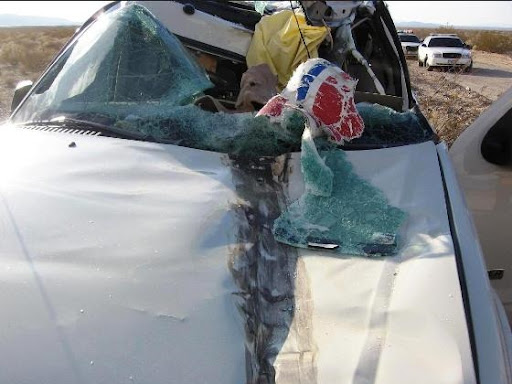 The damage had been done to poor Dave [he was listed as a serious injury in the NTSB report], but Earl wasn't done.

"I climbed about 200ft and was turning right to check on Dave. The airplane started to stall, the engine was running but no power [karma?]... I turned back left and landed on the dirt road." 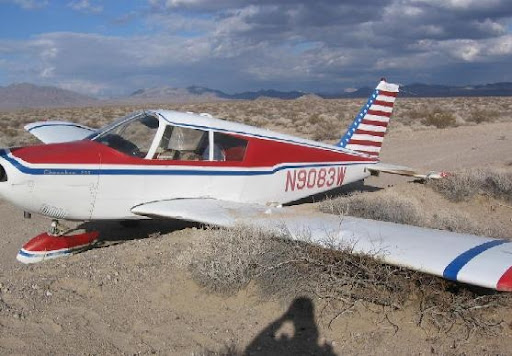 There's more at the link. (Note the wheel fairing from the aircraft, tastefully embedded in the Explorer's windscreen!)

I could hardly believe the stupidity involved in this incident; so I looked up the NTSB accident report. Sure enough, it confirmed every detail.

The pilot reported that he was returning to his home airport and was descending for landing when he saw his friend's car on the dirt road below him. He decided to make a 180-degree turn, and rolled out facing the car. The pilot stated that it looked like he was going to be low so he started a recovery from the descent. The closure rate was too fast and the left main landing gear of the airplane struck the vehicle. The pilot reported that he continued the climb to about 200 feet and made another turn to check on his friend. The pilot subsequently made a forced landing on the road. During the landing roll, the left wing contacted the top of the berm next to the road. During the collision with the vehicle, the left main landing gear had been sheared off and the driver of the vehicle sustained serious injuries.

The National Transportation Safety Board determines the probable cause(s) of this accident as follows:

The pilot's failure to maintain clearance from a ground vehicle during a low-altitude maneuver.

Ye Gods and little fishes . . . All that's missing is a call from the pilot to Air Traffic Control saying, "Hold my beer and watch this!"

Greetings from Texas,
There are no words. May I assume this man no longer has his licence?

Holy crap. And just who thought this doofus was bright enough for a pilot's license?? I don't know that I'd feel safe trusting him with a moped!

What a moron. History, condemned to repeat, etc.

The very same idea killed guitarist Randy Rhodes in the early '80s, when they decided to buzz Ozzy Osbourne's tour bus. The plane, pilot, and guitarist all died horribly.

For some reason, when I read this, the term "dumbass" popped into my mind...