I'm pleased to see that Loganair, a small Scottish airline, is to resume its daily service between Westray and Papa Westray in the Orkney Islands, north of Scotland. It'll operate between June and September, when the weather is good enough to permit scheduled airline operations, before shutting down again during the winter months. The flights will be conducted with eight-passenger Britten-Norman Islander aircraft (shown below). 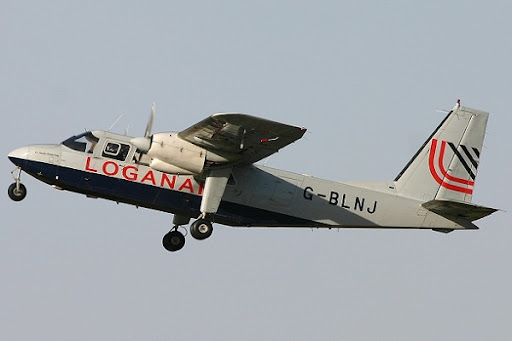 The Westray-Papa Westray hop is classified as the shortest scheduled air service in the world. From start to finish, the flights last less than two minutes! Here's a video clip of the entire flight.

That's a flight I'd enjoy making, just to say I'd done it!

I'm with you - do it for the experience & the bragging rights. Heh.

You know I wouldn't be too surprised to find that an airship would make economic sense for a journey that short, even if it took fifteen minutes rather than two. (Assuming someone builds such a craft, of course.)

"This is your captain speaking. I just wanted to inform you that we've reached our cruising altitude of 200 feet, and will be making our descent shortly. We'll be taking a touch longer to land on this flight, as we need to dust the crops in the field at the end of the runway first. Thank you for flying with us."

I know this isn't as exciting, and I really do think this is really cool, but wouldn't a ferry be more economical?

No beverage service?
(somebody had to say it)

Wow! I flew Loganair from Glasgow to Islay a couple of weeks ago, and I thought that was a short flight in a small plane (20 mins in a Saab 340). This takes the biscuit.

Actually airborne for only about a minute and a half.

So, no chance to join the mile high club?