Back in April 2008, I mentioned the strange (and sad) story of Fr. Adelir Antonio de Carli, a Brazilian priest who tried to make a record long-distance flight suspended beneath a cluster of small helium-filled balloons. Unfortunately, the winds changed and carried him out into the Atlantic Ocean, where he disappeared from sight. His body was later found, floating in the sea. His mishap earned him first place in the Darwin Awards for 2008.

It seems Fr. de Carli wasn't alone in his fascination for floating along beneath a cloud of multi-colored balloons. An American balloonist, Jonathan Trappe, has just crossed the English Channel using a similar conveyance. The Daily Mail reports:

... yesterday, Mr Trappe took along just a wicker chair - albeit one kitted out with radio communication, satellite navigation, oxygen masks and an emergency beacon.

The 36-year-old dangled beneath 54 balloons for more than four hours to complete the 22-mile journey, taking off from Ashford in Kent and landing near Dunkirk in northern France. 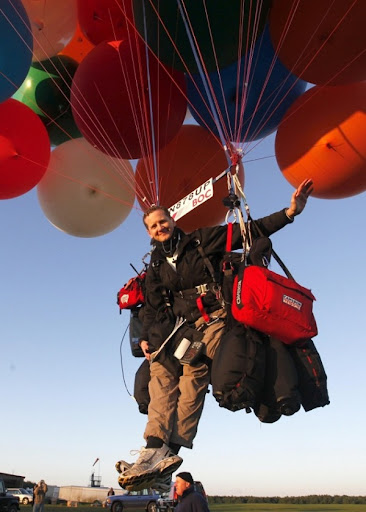 ... he was forced to crash land in a cabbage patch after the wind blew him off course, to the bemusement of French gendarmes.

Mr Trappe, a trained pilot, said: 'The flight was outstanding, but it was a hell of a landing. I'm tremendously proud. It's an outstanding thing to do.

'Right over the white cliffs of Dover in complete silence. It was tremendously peaceful, tremendously beautiful.' 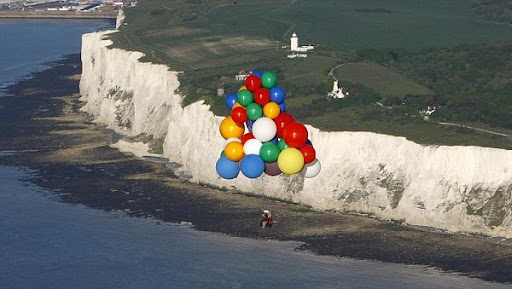 The American reached a top height of 7,500ft and travelled at up to 25mph before descending by cutting away some of the balloons tied to his chair.

French police said they were 'surprised' by Mr Trappe's unorthodox arrival, but he avoided arrest after producing authorisation to land in the country.

Mr Trappe said the journey had fulfilled a childhood dream, adding: 'I think it's something that's shared across cultures and across borders.

'Just this wonderful fantasy of grabbing on to toy balloons and floating into open space.'

Mr Trappe is the first 'cluster balloonist' to successfully cross the Channel, a 22-mile journey from Dover to Calais.

He set off from the Kent Gliding Club in Challock, near Ashford, shortly after 5am and took about an hour to drift the 10 miles to the coast.

He then spent almost two hours soaring over the Channel and floated over northern France before reaching Dunkirk.

Unfortunately, the wind carried him off his intended route, and he was forced to make a crash-landing to avoid flying into restricted airspace, a no-fly zone between Dunkirk and the border with Belgium.

He descended by cutting away some of the eight-foot helium balloons which were tied to his chair.

Mr Trappe was greeted by his girlfriend Nidia Ramirez, 30, who waved him off in Kent and then caught a Eurostar train to race under the Channel, while her boyfriend floated over it.

Last month he claimed a new world record for the longest free-floating cluster balloon flight, when he travelled 109 miles across his home state of North Carolina in 14 hours.

During another flight, he claims to have ascended to almost 18,000ft.

Here's a brief video clip of Mr. Trappe floating over the English coast on his way out across the Channel.

Congratulations to him on a 'first' . . . and on not following Fr. de Carli's unfortunate example!

Oh, that looks like all kinds of fu... SQUIRREL!!

You may have not noticed... In the close-up picture, the balloon carries the number sequence N878UP. Guess what? According to the aircraft registry at faa.gov, N878UP is a certified experimental aircraft/balloon. Registered to Mr. Jonathan Trappe. Aircraft model: Carl Fredrecksen. Yeah, the character from the Disney movie "Up".