You've never heard of 'Dwile Flonking'? Neither had I, until I read about the first world championships in this 'sport' being derailed by political correctness. The Telegraph reports:

The traditional East Anglian pub sport of 'Dwile Flonking' has been banned by a council because it breached health and safety drinking laws, it was claimed.

The sport’s inaugural world championships were due to be held on Saturday at the Dog Inn pub, in Ludham, Great Yarmouth.

But its future is in doubt after Norfolk District Council outlawed the game because it contravened laws aimed at banning speed drinking.

Event organisers were locked in crisis talks on Friday night to find a way for teams, who are visiting from all over the country, to participate.

It was hoped it could have become a local tourist attraction.

During the game, 'flonkers' use a pole to launch a beer-soaked cloth at opponents, with the aim of giving them a hearty wet slap in the face. 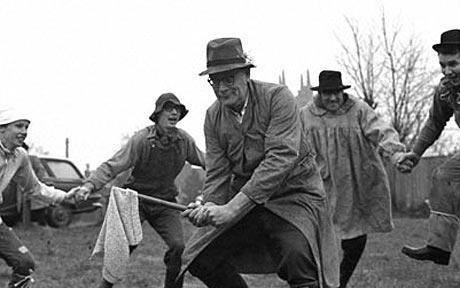 Rules state if their soggy missile misses its target twice in a row, the competitor must down a pot - or half [a pint] - of ale as quickly as possible.

But after reading about the planned tournament online Tony Gent, the council’s licensing officer, told Mrs Clinch she would be breaking the law.

"I was completely taken aback. It seems the law is the law ... but is does seem over the top," said the pub’s landlord, Lorraine Clinch, 49.

"Everyone is a willing participant and we are not expecting hordes of people turning up to take part.

"It is just a bit of fun and we are only talking about drinking half a pint of real ale."

Breaches of the new code could lead to pubs losing their licences, fines of up to £20,000 [about US $28,950] for landlords and even six months in prison.

The word 'dwile' comes from Suffolk dialect meaning dishcloth and 'flonk' could be derived from 'flong', a printing term to describe a paper mould used to create a type impression.

Well, I think it's safe to say that dwile flonking isn't likely to replace football, baseball or basketball as a US sporting passion . . . but it seems a bit much to ban it for health and safety reasons! Couldn't they just have arranged taxis for competitors instead, so they wouldn't have to dwile-flonk and drive?

When are the English going to say enough is enough?

Gee, I'm just surprised the reason it was cancelled was not due to the use of a projectile!

Forget the projectile. You could put an eye out with that stick!

The English bureaucrat will not be satisfied until the entire world is made out of Nerf material.