Happy birthday to the laser


Fifty years ago, on May 16th, 1960, Dr. Theodore Maiman activated the first working laser the world had ever seen. His original device still exists. It's shown below, first in a contemporary photograph, then earlier this year, held by his widow, Mrs. Kathleen Maiman. 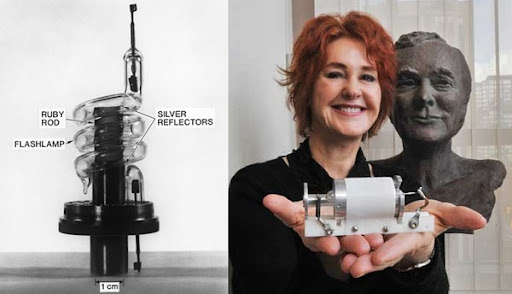 The world's first laser — which emitted a coherent energy beam for the first time on May 16, 1960 — is right here in Vancouver, locked away in a safe-deposit box downtown.

In May, it will be brought out of storage to be the star attraction at a conference at Simon Fraser University marking its anniversary.

At that conference, the laser will be hooked up to a power source and fire its beam of light once more. A half century after it made history, the world's first laser still works.

The laser, which was built and tested at a lab in California, came to Vancouver in 1999 along with its inventor, Ted Maiman and his wife Kathleen.

The two had visited Vancouver many times before and enjoyed it so much they decided to move here permanently.

Kathleen Maiman said the genius of her husband's invention was its simplicity.

By the late 1950s, a number of scientists had written papers with theories of how a laser (an acronym for light amplification by stimulated emission of radiation) could be created, using everything from gas vapours to cryogenic technology.

"But they hadn't figured it out yet: how to make a device that would make coherent light, which is one wavelength and one colour," said Kathleen, whose husband died in 2007.

Ted's big idea, she said, was to use something from nature — a ruby — to turn normal, diffuse light into a single, concentrated laser beam.

The end result, which he called the "ruby laser," looks kind of like a corkscrew placed inside a toilet paper roll and is so small it can fit in the palm of your hand.

"It looks like a high school project. It is so simple," Kathleen said. "But [so much] physics and thought went into it."

The device works by focusing normal light from a small, high-intensity lamp into the heart of a synthetic ruby crystal (like a real ruby except without impurities).

As light bounces back and forth inside the crystal, it activates photons which eventually escape the crystal as a brief pulse of laser light.

When Maiman's employer, Hughes Research Laboratories, announced the laser's invention, it was greeted by headlines calling it a "death ray," a light "brighter than the sun."

It was feared the instrument would lead to frightening new weapons of war.

Kathleen said this saddened Ted, who thought lasers could have a more positive impact on society.

"It has an incredible number of applications in a variety of fields," said Andrew Rawicz, a professor at SFU and organizer of the laser conference. "It's used for cutting, for welding. You have it in medicine, in dentistry, in diamondology."

Lasers make our DVD players work, scan our products at the grocery store and correct our eyesight. 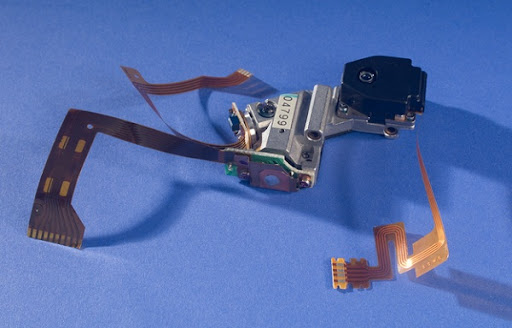 The potential of lasers wasn't as clear in 1960, though.

Kathleen said her husband, who was hired at Hughes to work on government aerospace contracts, had a hard time convincing his bosses to let him work on his laser project at all.

"Why would we want to make a laser?" Kathleen recalls Hughes telling her husband. "What would we do with it?"

Kathleen said she hopes her husband's laser will someday be displayed in a museum. But she said the device is too valuable to her to just give it away.

So for now, the laser sits in a safe-deposit box at a downtown Vancouver bank, where it lies in a small white cardboard box, protected by bubble wrap and Styrofoam.

Scrawled on the box's top, in red ink, are the words "Maiman's laser."

A more detailed timeline, showing how the laser was developed incrementally using knowledge gleaned from radar systems of World War II, may be found here. It's very interesting reading, as is a photographic gallery of the history of laser development, which you'll find here.

It's astonishing to think of just how prevalent lasers have become. For one thing, you wouldn't be reading this blog without them - they're at the heart of fiber-optic data transmission, and the Internet would be technologically impossible in their absence. They direct weapons to a precise target, thereby sparing countless thousands of 'collateral damage' casualties such as were caused in earlier wars; they replace scalpels, making possible delicate surgeries that couldn't be performed without them; they weld metals together; they're in many of the devices we use every day without even thinking about a laser, such as DVD and CD players and drives, optical recognition systems, traffic control applications and the like. Yet they've only been with us for fifty years . . .

One can't help but wonder how widely they'll be used fifty years from now - probably in ways we can't even imagine yet!

Huh. I remember as a physics major at Alfred University in 1963, Dr. maiman brought his ruby laser to our physics symposium. We all thought it was pretty cool, but had no premonition of how extensively the technology would become. In the late 1980s, i was supporting a program at lawrence Livermore to grow a custom Md-YAG crystal with special 'doping" to produce a multi-color medium-poer pulsed laser for battlefield use. And today? They're everywhere. tempus Fugit.

If it is using lasers to compress hydrogen that makes sustainable fusion power a reality, then he will literally have advanced mankind into a new era of perhaps not being such dicks to one another.

(Then again if we don't have to fight over oil I'm sure we'll find something else...)