Clouds as you've never seen them before


Wired magazine has a fascinating article on how clouds appear from space. There are patterns and formations that I've never seen photographed from the surface. Here are a few to whet your appetite.

Clouds are fascinating because they take on so many different, beautiful shapes and are constantly changing. Cloud-watching from Earth can be endlessly entertaining, but some of the most amazing cloud patterns can only be properly appreciated from space.

Satellites can take in thousands of miles of the Earth’s surface in one shot, revealing complicated and intriguing cloud patterns we could never see from below. We’ve gathered here some of the best cloud formations to see from above.

The crazy-looking swirls in the image [below] may be one of the weirdest cloud formations that can be seen from space. The pattern is known as a von Kármán vortex street, named after Theodore von Kármán. First noticed in the laboratory by fluid dynamicists, it occurs when a more-viscous fluid flows through water and encounters a cylindrical object, which creates vortices in the flow.

Alejandro Selkirk Island, off the Chilean coast, is acting like the cylinder in the image, taken by the Landsat 7 satellite in September 1999. A beautiful vortex street disrupts a layer of stratocumulus clouds low enough to be affected by the island, which rises a mile above sea level. 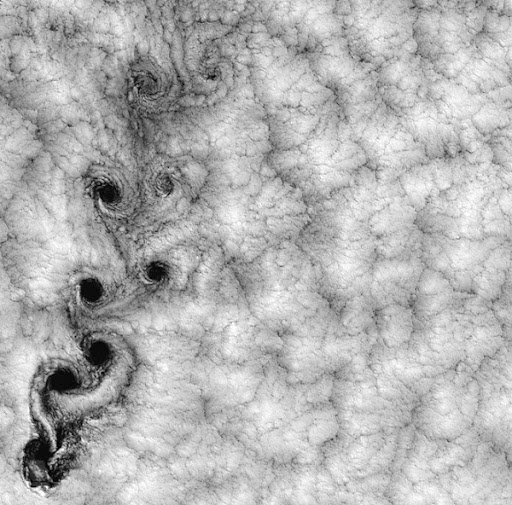 More strange and wonderful vortex streets formed by islands can be seen in the images below and in the last slide of this gallery. Below is Guadalupe Island, 21 miles off the coast of Mexico’s Baja California, shot in 2000 by Landsat 7. 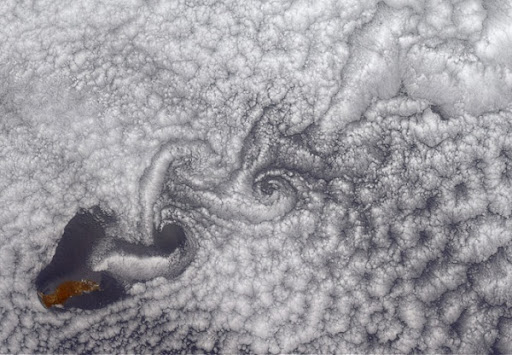 ... the Sandwich Islands in the Southern Atlantic are ... creating wakes as low-lying stratiform clouds pass by their volcanic peaks. The size of the wake corresponds to the height of each peak, which range in elevation from 620 feet to 4,500 feet. This image was captured by the MODIS instrument on NASA’s Aqua satellite in January 2004. 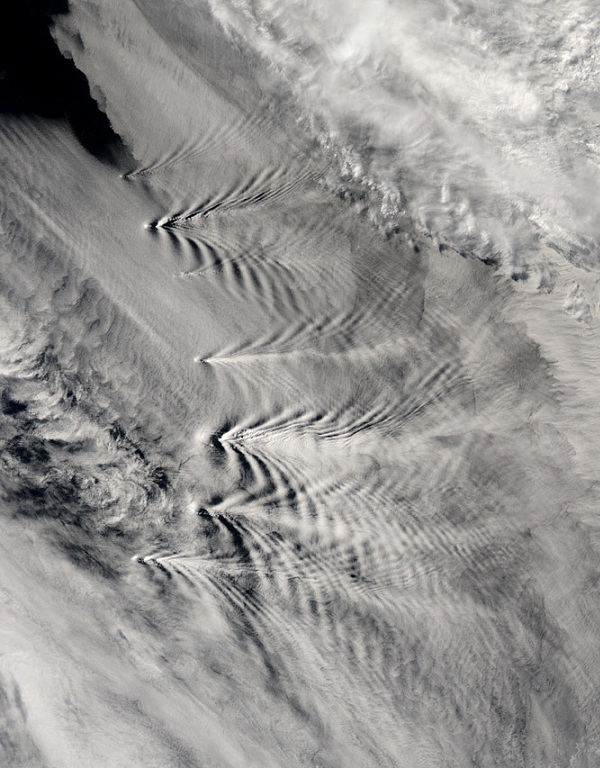 Wind is chilled as it moves across sea ice in the Bering Strait, and when this cold air hits the the open ocean, parallel rows of clouds known as cloud streets are formed.

The streets are the result of the interaction of the dry, chilled wind with the warmer, wetter air over the water. The warm air rises and is cooled by the wind, which causes the water vapor in it to condense into clouds. At the same time, the cool air sinks, which sets up long rotating cylinders of air where clouds are formed on the upward moving sides, and the air stays clear on the downsides. This creates the long, alternating rows of clouds and clear air seen in the image of the Bering Strait taken in January 2010 by the MODIS instrument on NASA’s Terra satellite. 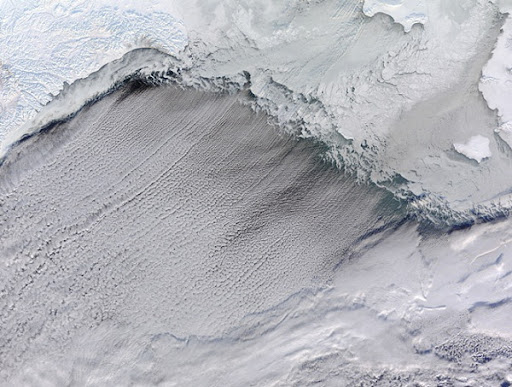 Below is a closer view of cloud streets in the Bering Strait captured by Terra on January 20, 2006. 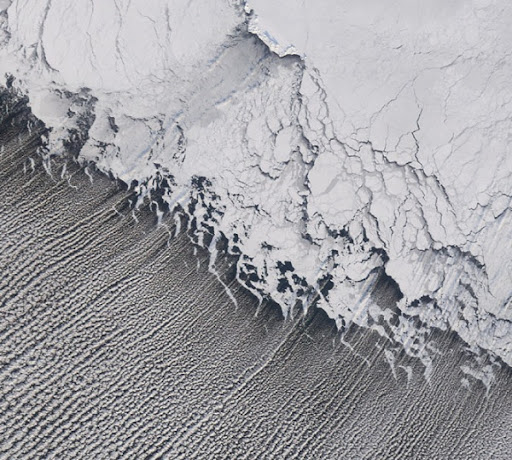 There's much more at the link, including many more (and larger) photographs. Fascinating and highly recommended viewing.

Those are interesting, as are the causes/effects. Lots of scientists are trying to figure out the hows and whys of clouds to try to mitigate hurricanes, typhoons and tornadoes.