A baffled motorist was left fuming after returning to her parked car to find double yellow lines painted either side of it - and a parking ticket slapped on the windscreen.

Bungling parking officials fined June Williams yesterday despite road markings only being painted round her vehicle after she had parked. 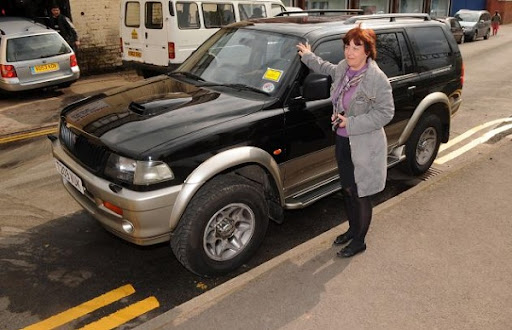 Debt collector Mrs Williams, 58, said she has parked in the same spot on Mondays and Tuesdays near work in Wolverhampton for 18 months.

But when she left her Mitsubishi Challenger in her usual spot and returned to her car after work at 4.30pm, she found newly painted double yellow lines had been painted up to her front wheels - then restarted behind her car's boot.

To cap the bizarre episode, she was slapped with a £70 fine on her windscreen - but is refusing to pay it.

Alistair Merrick, Wolverhampton City Council's chief officer with responsibility for parking enforcement, apologised to Mrs Williams, adding: 'Clearly this ticket has been issued in error. It will be cancelled.'

Typical of the bureaucratic approach, isn't it? "We've painted the markings now, so you're in violation - even if you were there first; so we'll give you a ticket!"

The picture very clearly shows that she's parked in a spot that doesn't have double yellow lines. No ticket should have been issued.