The cheese rolled after all!


I mentioned earlier this year that the annual Gloucestershire cheese roll (which we've covered for the past two years) had been canceled due to pressure by the authorities, who were concerned about health and safety issues.

Fortunately, there's a spark of independence and rebellion against stuffy authorities left in at least some of the English. The Daily Mail reports:

Hundreds of daredevils gathered on a steep hillside today for the first-ever 'unofficial' cheese rolling contest - after the historic event was axed over health and safety fears.

Runners and spectators met at Cooper's Hill near Brockworth in Gloucestershire to carry on the tradition which sees competitors chase a 7lb wheel of Double Gloucester down a 200-yard incline. 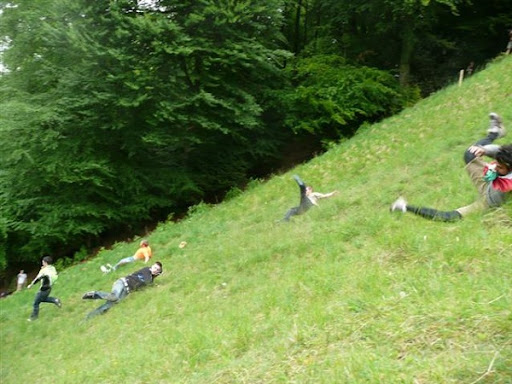 The Whitsun cheese roll had been held annually for nearly two centuries until it was banned earlier this year because it was deemed too dangerous.

But fans of the tradition vowed to keep it going and hundreds ignored official warnings by attending this year's event.

Police said there would be no dedicated medical help for casualties and that the unofficial contests could jeopardise the chance of an official event happening next year under a different format.

But the roll still attracted around 300 people with visitors travelling from as far afield as Holland to witness the eccentric tradition.

The competition, which dates back hundreds of years, involves participants chasing a 7lb Double Gloucester cheese down the hill in a series of races.

The winner of each race wins the cheese.

In 1997 at least 33 people were injured and treated by St John's Ambulance.

There's more at the link, including a rather fetching photograph of a young lady trying to keep her . . . er . . . assets contained within her top as she went down the hill at high speed! It may not be safe for work, though.

Good on them for flipping the bird to the so-called authorities.