A new method of treating wounds and surgical incisions


I'm very interested to read of a new treatment for cuts and incisions, involving lasers and nanotechnology. Wired magazine reports:

Forget stitches and old-school sutures. The Air Force is funding scientists who are using nano-technology and lasers to seal up wounds at a molecular level.

It might sound like Star Trek tech, but it’s actually the latest in a series of ambitious Pentagon efforts to create faster, more effective methods of treating war-zone injuries.

Massachusetts General Hospital researchers Irene Kochevar, Robert Redmond and dermatologist Sandy Tsao are behind the nano-tech project, which has been funded by various agencies within the Department of Defense for eight years. They’ve successfully tried out the nano-sutures in lab experiments and a clinical trial of 31 patients in need of skin incisions.

An incision treated half with the new laser/nanotech treatment,
and half with conventional sutures. The difference in healing is obvious.

The process would replace the sutures and staples traditionally used to repair wounded skin. Instead of being sealed up with a needle and thread, a patient’s wound would be coated in a dye, then exposed to green light for 2-3 minutes. The dye absorbs the light and catalyzes molecular bonds between the tissue’s collagen.

The bonds instantly create a seal that’s watertight, which prevents inflammation or risk of infection, and speeds up the formation of scar tissue.

“It’s so simple, but such an improvement on current processes, and that’s what’s really remarkable,” Kochevar told Danger Room. The process uses a hand-held laser device that’s about a foot long and a few inches wide.

Penetrating eye wounds, like shrapnel injuries, could also benefit from a patch version of the treatment. A biological membrane stained with dye would be applied over the eye, and quickly sealed using the laser until a soldier could undergo more intensive surgery.

Intrigued, I went to the researchers' Web site to learn more. They describe the process as follows:

Light-activated protein crosslinking technology is being developed for attaching tissue surfaces with a water-tight, strong bond and for forming engineered tissues with unique properties. For attaching tissues, the technology is called Photochemical Tissue Bonding (PTB). PTB has demonstrated advantages over conventional sutures, staples and glues in a wide variety of surgeries. These technologies were invented and developed in the Kochevar and Redmond laboratories over the last seven years. 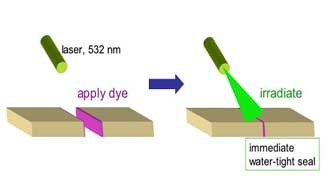 In the PTB process, a light-sensitive dye is applied to the tissue surfaces, the surfaces are placed in contact and the dye-stained area is exposed to visible radiation that does not cause thermal damage. An immediate, water-tight strong bond is produced without additional glues or proteins.

Photocrosslinking of proteins has significant advantages over sutures and staples for tissue repair.

- PTB does not stimulate inflammation or cause additional damage to tissue, thus reducing fibrosis and scarring.

- Soft, delicate, difficult-to-suture tissues can be readily joined with PTB.

- An immediate, water-tight seal is formed.

Again, there's more at the link.

This looks like a real advance in wound and incision treatment, if it can be further developed. Looking at the various and sundry scars on my body, and remembering how long it took for some of them to heal (particularly when infection set in), I'd have loved to have had something like this available thirty years ago!

That looks amazing! I really hope we see this in widespread use soon. The reduced infection rate and improved healing time would do amazing things for patient recovery.

And for wounds too deep or broad to suture (such as burns), there's inkjet printing of skin cells!
http://science.dodlive.mil/2010/04/19/printing-new-skin-saving-lives-with-ink-jet-printers/

It's coming, but the civilian sector probably will NOT see this for 10 years or more... Gotta pass all those clinical trials, etc.

Granted I'm no doctor, (I do play one at work ... long story and no it's not a metaphor), but it was my understanding that one of the things stitches do is keep the wound closed while the healing occurs, and keeps it that way even if the wound is jostled and the wound breaks open again (provided the stitches hold). Is this strong enough to prevent that, or would you still need something like butterfly stitches to hold this in place for the first few weeks?