The economy: Still no light at the end of the tunnel


I've deliberately not commented too much about the economy in recent weeks, partly because some readers seem to think that I take delight in negative news. That's not true, of course: a poor economy affects me at least as much as it does everyone else, and I'm hurting too right now! Nevertheless, it's worth taking a look at the current state of affairs.

There are those who are trying to persuade us that we're 'over the hump'; that things are improving. The New York Times, for example, recently proclaimed: 'From The Mall To The Docks, Signs Of Rebound'.

At malls from New Jersey to California, shoppers are snapping up electronics and furniture, as fears of joblessness yield to exuberance over rising stock prices. Tractor trailers and railroad cars haul swelling quantities of goods through transportation corridors, generating paychecks for truckers and repair crews.

On the factory floor, production is expanding, a point underscored by government data released Friday showing a hefty increase in March for orders of long-lasting manufactured items. In apartment towers and on cul-de-sacs, sales of new homes surged in March, climbing by 27 percent, amplifying hopes that a wrenching real estate disaster may finally be releasing its grip on the national economy.

After the worst downturn since the Great Depression, signs of recovery are mounting — albeit tinged with ambiguity. Despite worries that American consumers might hunker down for years — spooked by debt, lost savings and unemployment — thriftiness has given way to the outlines of a new shopping spree: households are replacing cars, upgrading home furnishings and amassing gadgets.

While few dispute signs of recovery across much of the economy, significant debate remains on how robust and sustained it will be. The lingering effects of the financial crisis have some economists envisioning a long stretch of sluggish growth.

But recent months have delivered a stream of news bolstering the notion of a more vigorous recovery. Technology companies have racked up substantial sales. After a decade of painful decline, manufacturing is tentatively adding jobs. Retail sales increased by 9.1 percent in March at established stores compared with a year earlier, according to Thomson Reuters, marking the seventh consecutive month of growth. Exports swelled in the first two months of the year by nearly 15 percent compared with a year earlier, according to the Commerce Department.

Unfortunately, the article above is based on a complete misreading of the situation. The reason for the apparent improvement is that the US Government has been pumping billions upon billions of dollars into the economy, effectively replacing what consumers were no longer able to spend for themselves. This massive infusion of funds has not, repeat, not helped to dig consumers out from under the mountain of debt they've accumulated. That debt mountain still exists. We'll come back to it a little later.

The New York Times partially and implicitly acknowledges this reality, although it's buried deep within the article quoted above:

Still, much of the improvement appears the result of the nearly $800 billion government stimulus program. As that package is largely exhausted late this year, further expansion may hinge on whether consumers keep spending. That probably depends on the job market, which remains weak.

There's another factor - well, two more factors - behind the apparent recovery in (some) consumer spending. The Tennessean reports:

Increased consumer spending has fueled hopes that the current economic recovery will keep getting stronger, but behind the encouraging numbers is a little-noticed reality: Much of the new spending has come not from America's broad middle class but from a small slice of affluent people at the top.

And upper-crust spending, while welcome, can be worrisomely volatile: Since it involves luxuries, not everyday necessities, the buying can suddenly shrink if something such as the recent stock market plunge panics affluent shoppers.

What's more, some analysts calculate that another big chunk of the recent spending spurt has come from an even shakier source — delinquent homeowners who have more cash in their pockets because they've stopped making mortgage payments now that their houses are worth less than the loan amounts.

Economists' uneasiness over building a recovery on such uncertain foundations is all the greater because the larger fundamentals also are shadowed by uncertainty.

The improving job market should broaden the base of consumer spending, but wages are not expected to go up fast, which will crimp middle-class spending power.

Moreover, the job gains this year have gone largely to less-educated and lower-income workers, according to Labor Department statistics.

"The economy can grow if lower-income households aren't able to spend, but it can't flourish," said Mark Zandi, chief economist at Moody's Economy.com.

Since December, sales at luxury chains have outpaced those at department stores and discounters, helping boost overall consumer spending by a surprisingly robust 3.6% in the first quarter, according to data from the International Council of Shopping Centers.

But an economy that has become more dependent on the well-to-do is an economy at the mercy of volatile financial markets.

The soaring stock market last year boosted the spirits of high-income consumers and helped open their wallets. Wall Street's latest plunge and the continuing fear of a financial meltdown in Europe can just as quickly send them running for cover.

Zandi thinks the underwater mortgage factor also may have juiced up consumption in the first quarter: Millions of homeowners are choosing to default on their mortgages or aren't otherwise making their monthly housing payments — and that's freed up billions of dollars in cash for consumers.

U.S. Housing and Urban Development Secretary Shaun Donovan said that's hard to know, but he estimated that only 10 percent of delinquent homeowners who have the ability to pay are opting not to do so.

Still, that translates into hundreds of thousands of families. And with monthly payments averaging roughly $1,500, said Economy.com's Scott Hoyt, a good portion is probably being spent.

Consider these realities, and follow the links in each point for further information if you wish:

The US government, and the governments of most of the fifty States, have incurred and will continue to incur debts in the trillions of dollars. In an effort to stabilize the current crisis, they've essentially 'federalized' a great deal of private debt, including a very large chunk of the home mortgage market. (Many people don't know that over 2009 and the first quarter of 2010, virtually all mortgages issued were underwritten - or subsequently purchased - by US government entities.) This has imposed enormous strains on the world financial system, not least because most First World economies have done the same.

The combined demand by governments for credit to fund these programs is so great that it's destabilizing the world's financial system. The International Monetary Fund has publicly warned of this danger. What's more, world financial markets are increasingly leery of such enormous demand, and worried about sovereign debt defaults. Nouriel Roubini, an economist who forecast the current recession, has warned very emphatically about this, and investors in US Treasury bonds - the US Government's primary credit source - are clearly taking note.

Roubini believes that stocks are in for a torrid time.

As the market slides into correction territory, Roubini said weakness in euro zone countries and a slowdown in the US and other developed countries will make things even more difficult for investors in the months ahead.

"There are some parts of the global economy that are now at the risk of a double-dip recession," said Roubini, head of Roubini Global Economics. "From here on I see things getting worse."

Prices in both stocks and commodities are likely to take a hit, and investors may only be safe in cash and other safe havens. Roubini said investors also can use options to hedge against future market risk that he said is sure to come as conditions weaken in the US, Japan, China and through much of Europe.

That will lave little room for growth both in economic measures and in most investment classes, Roubini said.

"What needs to be done is clear. We need to raise taxes and cut spending. Otherwise we're going to get a fiscal train wreck," he said. "It's going to take years of sacrifices."

As the indispensable Karl Denninger has been pointing out for months, the real problem has not been addressed at all. That problem is the enormous mountain of consumer debt that has built up over many, many years. Unless and until it's resolved - in other words, removed - there can be no meaningful recovery. He pointed out recently:

If you "own" a $500,000 house but have a $500,000 mortgage you in fact own nothing and have no prosperity. You have the trappings of wealth but not the actualization of it. If that valuation is not supported by underlying economic facts then when (not if) it collapses you find that you not only have nothing you have less than nothing as the vacuum cleaner is attached to your wallet, job, life and soul and sucks you into the black hole of debt on the other end.

... debt used to pull forward demand comes with interest cost, and once taken on is used up and done. In order to keep doing so you must pull forward with ever-larger amounts of debt, and the interest expense inexorably rises as a function of compounding, even if you can manage to keep rates low.

... Exponential functions all look great when you start, and it is only when one recognizes the long-term impact of what you're doing that the horror of the future comes into sharp relief. If you fail to recognize this up front you get to live the horror, and once that time has passed there is simply no escape from it, no matter what you'd like to have happen. 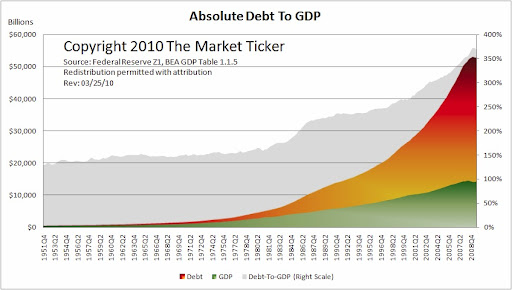 If this [graph] doesn't make clear that the financial collapse resulted from the excessive debt then you're blind - or an idiot who is unfit to scrub toilets with a toothbrush ...

There are plenty of people who are simply wrong because they have examined the facts and reached incorrect conclusions, and then there are those who simply ignore the facts and spout bald LIES in an attempt to drive an agenda that will lead directly to ruin.

Friends, we're nowhere near out of the woods yet. If there is, indeed, a light at the end of the tunnel, right now it's guaranteed to be an oncoming train! Don't let false optimism fool you. The world economic system's in terrible shape, and it won't improve unless and until the underlying, fundamental causes of the problem have been addressed. So far, nothing done by the US Government, or any other First World government, has addressed them.

You think it's been tough so far? Batten down the hatches. It's going to get a lot tougher.

Been following Karl's blog (I link it at mine under the title Cassandra) for a long time. I can find no fault in his reasoning and it scares the hell out of me. Then watching Hopey's minions pass the health care system destruction act and push for cap-and-trash and amnesty for illegals is enough to have a prudent taxpayer prep for the barricades.
I wonder what will be the straw that breaks the world economy's back?