A hero's guns go on display


The BBC reports that the personal weapons of a famous World War II soldier have been identified, and are to go on display at a museum in Scotland.

Six firearms which once belonged to World War II hero Geoffrey Hallowes have been handed over to a museum after being found at a house in Surrey. 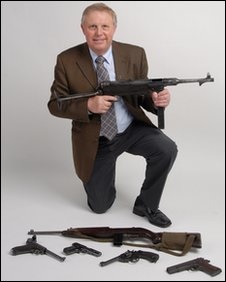 The guns were discovered in March 2008 by a woman who was clearing out the property in Walton-on-Thames and handed them over to police.

Firearms specialists established their link with Mr Hallowes, who served with the Special Operations Executive (SOE).

They have now been given to the Gordon Highlanders Museum in Aberdeen.

Mr Hallowes served with the Gordon Highlanders in the Far East before joining the SOE in Europe in the second half of the WWII.

He helped to organise the French Resistance after D-Day and received a number of gallantry awards, including the Croix de Guerre and Legion d'honneur.

In the 1950s, after his return to Britain, he married the wartime SOE heroine and George Cross holder, Odette Sansom, the subject of a 1950 film starring Anna Neagle.

The firearms are to be displayed alongside Mr Hallowes' war medals.

"This is because not only can we connect these firearms with an individual, but an individual with an extraordinary history."


(I note, too, that private ownership of most of those weapons was strictly illegal in England. One may surmise that Mr. Hallowes, based on his experiences during the war, either wanted a few mementos of the occasion, or was determined not to be caught short if things ever went to hell in a handbasket again! I suspect the latter. One can't help but like his spirit.) 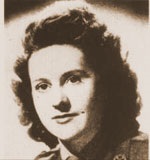 For the benefit of readers who may never have heard of her, Mr. Hallowes' wife, Odette Sansom, was a truly impressive woman. Her World War II exploits may be read here (link is to an Adobe Acrobat file in .PDF format). It's a remarkable story, and highly recommended reading. For her courage, particularly in refusing to betray her comrades under German torture, despite being condemned to death and treated most brutally, she was awarded (amongst other decorations) the George Cross, which is a medal not familiar to most Americans. It's second only to the Victoria Cross (Britain's equivalent of the US Medal of Honor) for purposes of protocol. As Wikipedia states:

The GC is the civilian counterpart of the Victoria Cross (VC) and the highest gallantry award for civilians as well as for military personnel in actions which are not in the face of the enemy or for which purely military honours would not normally be granted.

I think the concept of the GC is an excellent idea, as it allows recognition of non-combatant courage of a similar level or nature to that required to win the VC (or MoH). The US has nothing like it, and I wish it would consider a similar decoration, perhaps a Cross of Honor to go with the MoH. Ms. Sansom was the first woman to be awarded the GC. (It would later be awarded [posthumously] to two of her colleagues in SOE who died at German hands.) She always insisted that her GC should be regarded as recognition of all SOE's female agents who died under torture in France and Germany.

One hopes that Mr. Hallowes and his wife have been reunited with old comrades in the life to come . . . and that we, today, may learn from their example of courage and self-sacrifice, and emulate it if necessary. Truly, they were remarkable people.

Regarding the legality of these weapons in the UK, I have no doubt that our Glorious Leaders would have thrown Mr.Hallowes into prison for the mandatory five-year minimum sentence, despite his honourable and courageous service.
In fact, his honour and courage might well have weighed against him, as such people are a threat to our current Stasi-mentality politicians.

It's sad to see they had to be hidden all these years instead of on his wall. I'd sooner they go to his heirs, but better in a museum than history cut to pieces.

You know the government will destroy those weapons. They will look real enough on the museum wall, but they will cut the chambers and weld the actions. There were weapons taken from museums in Britain recently to be ruined and returned for display.

Have just seen these on display in the Gordon Highlanders Museum. They are properly displayed in a manner worthy of Mr Hallowes status and next to a photo of Mr Hallowes and Odette visiting the museum due to his being part of that Regiment in his earlier Army career.