A novice pilot - who had no training - broke his back in a terrifying crash after tethering his paraglider to a car and taking to the skies. 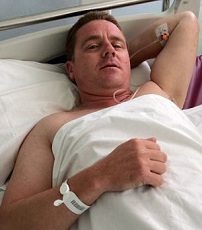 Roy Dixon had no experience of the dangerous pastime when he bought the paraglider for £300 [about US $431] from the auction website eBay.

The 45-year-old thrill-seeker admits he was only 'half way' through a book about paragliding when he decided to make his first attempt on Sunday evening.

Roy then made another disastrous decision - to use 50 feet of rope to tether the paraglider to his car in the hope it would act as an 'anchor'. Instead, it meant he was slammed into the side of a hill by a stray gust of wind, having lost control of the glider in seconds.

Roy was in the air for less than a minute before he plummeted 50ft to Earth, breaking his back in two places as his horrified family looked on.

Roy, of Juniper, near Hexham, said: 'I was in pain like you've never known. I was in a sitting position when I landed, so it just went straight up through my spine like a red hot poker. I tried to get in a position where I could land feet-first but I couldn't.

'I remember being up there and suddenly going "whoosh" over to one direction, and then "wham" straight down to the ground.

'It happened so quickly. I didn't expect to come down as hard as I did. I couldn't walk. I was in the foetal position and thrashing around in pain.'

He continued: 'I feel lucky but I also feel foolish. I was looking for a thrill - call it a mid-life crisis if you want. In the end I dodged death and paralysis. I feel like I've got off lightly, by the grace of God.'

Talk about an accident looking for a place to happen!

He'll have to try again for that Darwin Award.

Speaking of stupidity and pain going hand in hand..

Towing a proper sailplane behind a car on a much longer rope is an established and understood launch method, coincidentally.

"He'll have to try again for that Darwin Award." I don't know about that, he may have learned his lesson.

Where's the video? There has to be video!