Bruichladdich in the news again


Long-term readers will remember our June 2008 coverage of the Bruichladdich Distillery on the Isle of Islay in Scotland. Briefly, their brewery Web cameras were being used by the US Defense Threat Reduction Agency to train agents in how to spot a chemical warfare processing plant! The distillery also released a special cuvée named 'Yellow Submarine' after a local fisherman found one floating around with Royal Navy markings - which said Navy adamantly denied it had lost! Full details are at the link. Here's a brief video clip of the distillery's owner describing the fun and games.

The distillery's in the news again.

Creating renewable energy from whisky might sound like a harebrained scheme conceived at the end of a long evening drinking the amber nectar.

But an independently-owned Scottish distillery is hoping that the installation of a new biogas generator will prove to be a lasting moment of environmental clarity and help solve their energy problems.

This month, Bruichladdich -- one of eight distilleries to be found on the Scottish isle of Islay -- will take delivery of an anaerobic digester which will start turning their whisky waste into electricity. 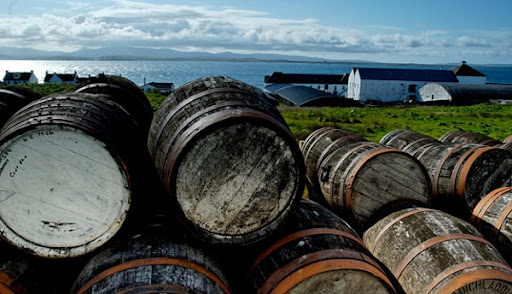 Mark Reynier, owner of Bruichladdich Distillery, hopes the digester will meet around 80 percent of its electricity needs and save the company up to £120,000 ($175,000) every year.

Reynier told CNN: "Our waste product is basically water left over after you've stripped all the alcohol out. It's called, rather unromantically, pot ale."

Every year, several hundred thousand liters of pot ale waste are taken away by a tanker and poured down a pipeline that feeds it into the Sound of Islay off the eastern coast of the island.

Its disposal is a costly business (in the region of $30,000 annually) and allied to rising energy costs it has forced the distillery to rethink how it sources its energy.

"We've looked at biomass and green energies and dismissed them one by one as being completely impractical and uneconomic for an industrial purpose," Reynier said.

"But one thing we can do is use this proven technology and generate biogas."

Anaerobic digestion occurs when natural food stuffs decompose in the absence of oxygen. The end product of this process creates methane which Reynier says will be fed into the generator and converted into green electricity. The only by-product is water.

If the biogas trial proves a success, the pot ale that was pumped into the sea on a daily basis will instead be continuously fed into the digester creating something of a virtuous production circle.

But Reynier says transforming the distillery isn't about being "some sort of eco-warrior" but rather about just trying to be sensible.

"We are practical people -- you have to be on an island like this," he said.

Sounds like a great idea to me. Now, if they'll just plow their savings on power back into the plant, to reduce the price of its product, I might be able to afford a dram now and again! I bought a bottle of 'Yellow Submarine' after the last story, and I have to concede the manager's point . . . it was indeed fearfully drinkable! (That's why there's none left, I'm afraid!)

Dang it, I can't find the Yellow Submarine on the site, I'd order a bottle or two just to have...