A very interesting inside look at the Russian Navy


The US Naval Institute has published an article giving a very interesting series of impressions of the Russian Navy. It cites a Russian document prepared for that Navy's high command, discussing a joint exercise with the French Navy in 2004. Here are a few excerpts from that Russian report, as cited by the USNI.

French sailors (not standing watch) have twelve hours in which to relax while Russian sailors have but six.

French officers paid attention to the presence on board the BPK [the Udaloy II-class destroyer Admiral Chabanenko] of a large number of:

- large mirrors (which can shatter during explosions and seriously cut people standing nearby; and the shards are potentially dangerous);

- plastic and wooden surfaces (which burn well and put out toxic smoke).

The sauna is potentially dangerous.

In the French Navy, the presence on board of dangerous objects and materials without good reason is categorically and strictly controlled. 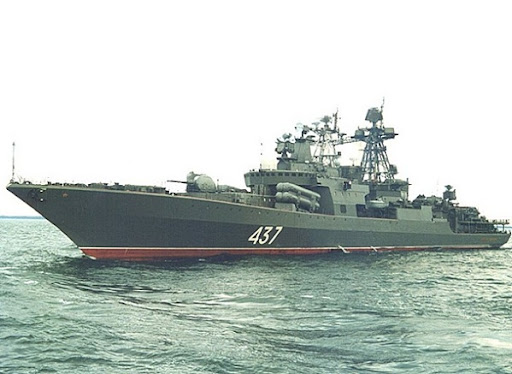 The metal decks [on Russian ships], especially when they are wet or covered in salt, are very slippery. There is a great probability of falling and receiving serious injury during pitching. The guests often slipped. The decks on French ships (as well as on American, British and Norwegian ships) are covered with a rough paint which limits slipping even when wet. The ladders also have a special coating, kind of like emory board, that limits slipping.

On board the more than thirty year old Tourville, there was hot and cold fresh water in all the compartments and showers all the time. (Note: in the margin, someone scribbled “No comment!!!”). The Tourville boils about a hundred tons of fresh water a day. 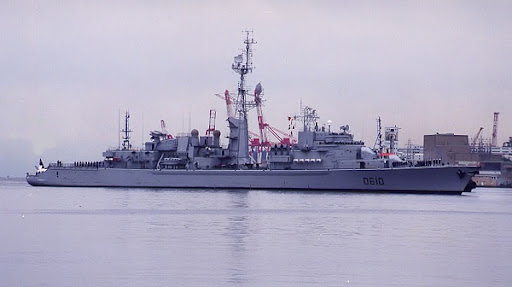 French officers were surprised that onboard the most modern Russian ship, provision of hot water to the staterooms wasn’t even planned for and that cold water was available once a day for ten minutes. The entire crew (450 people) washed once every ten days, over the course of eight hours. Each man had three to four minutes in the shower. The French officers paid attention to the appearance of the Russian sailors. By the end of the deployment, lice was found on the sailors.

1. “How seniors in rank and position relate to juniors, particularly to the sailors”.

This was a topic that the French officers paid special attention to. There was much yelling and cursing on the BPK and subordinates were often belittled (even senior officers in the presence of sailors.

The Chief of Staff refused to talk with a Russian communications officer (who had told the COS that he was a Captain 3rd rank) over the HF radio (I.E for the whole world to hear) to resolve some sort of problem. The French interpreter interpreted this conversation for the French servicemembers present. And they were very surprised: “Why doesn’t he want to talk to a Captain 3rd Rank?”

It was noted by the French officers that similar relations between people in France would be intolerable.

There are twenty four officers in the three hundred person crew on the Tourville. On board the BPK Admiral Chabanenko, with just a little more crew, there were twice as many officers, and taking into account embarked staff – four times as many. French officers were surprised at the amount of senior officers on board, especially Captain 1st Ranks – seven, whose functions could not be understood (on the Tourville, there is only the captain).

- The constant presence of the captain or senior on the bridge, who runs the ship: he works the radio himself, he himself evaluates the situation, he himself gives the wheel and engine telegraph commands. The watch officer plays no role in the running of the ship. The function of the watch officer is not understood. 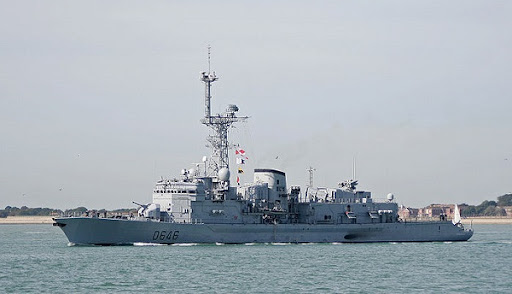 On the French destroyers, the plot is kept by the watch officer or by one of his two assistants (a warrant officer and a senior sailor who also is the signalman). The plot is kept on the bridge with the aid of GPS. Besides that, the plot is kept in the combat information center on an electronic map on a personal computer.

Often, conflicting commands were issued when the commander of the ship, the chief of staff and task force commander were on the bridge. The French liaison officers were surprised when someone corrected the orders of the ship’s commander.

- Tense situation on the bridge.

This was noted especially in areas with a lot of shipping traffic. There was much screaming and cursing on the bridge. The BPK, even having the right of way in accordance with MPPSS-72, would initiate unpredictable maneuvers, confusing the transports proceeding in their own lanes. The French liaison officers asked, “Don’t you ever have intensive marine traffic transiting your area?”

As noted above, the Tourville launches and recovers their rubber boat without crew for safety reasons.

A SPETZNAZ detachment was launched in a rubber boat from the BPK for an inspection operation. The launch was conducted in full view of the French ship. Because there was no initial planning of the launch and the boat wasn’t hooked up in the center, the boat was launched in almost a vertical position with SPETZNAZ troops strapped in. The French noted that this was dangerous.

It can be noted about boarding operations that the order to form a boarding group was only given as the ship was leaving base. No member of the team had a clear idea of what to do or how to do it. For a month before deployment the commander of the SPETZNAZ detachment on board was told that his help wasn’t needed during boarding and inspection operations. As a result, the order was given to the SPETZNAZ representative to be included in the inspection group and they began a crash training course (without actually getting into a small boat).

Food on French ships was significantly better and varied. The basic part of the menu – frutti di mare, meat and vegetables. For the week the Russian officers were on board, the menu did not repeat itself. According to the French sailors, the menu begins to repeat itself after they have been at sea for a month. As opposed to the Russian BPK, where the ration worsens as you go from the Captain's table, to the wardroom for the officers and warrants and further down to the crew, on the French destroyers and multipurpose submarines, there is one galley and the food is the same for everyone. The only difference: the crew’s mess is self service while the wardroom is served by well trained orderlies.

It's a fascinating look at how different navies approach the same problems . . . and goes some way towards explaining why the Russian navy is not considered a serious threat by the US Navy or other major maritime powers.

Interesting read: The Russians seem to be stuck on tradition and needless order, while the French have more focus on results and adequately content sailors.

I wonder how the two nations' other services would compare, particularly their Air Forces.