A unique and very lonely lighthouse!


I was intrigued to read about the world's most lonely lighthouse. It's in the city of Cologne, in Germany - about 125 miles from the sea as the crow flies! The Austrian Times reports:

The Helios lighthouse has stood among factory chimneys, warehouses and wasteland since 1890 after it had been ordered from the manufacturer Helios-Elektrizitäts AG by the German government to be situated on the island of Zanzibar. But shortly before it was due to be delivered Zanzibar was handed over to the British - who announced they did not want a German-made lighthouse on their island.

The lighthouse maker located at the heart of the Ehrenfeld industrial estate since 1881 then decided to use the unwanted building as a way of advertising their products - but so far from the sea they attracted few buyers and by 1904 the firm was bust despite a buyout by AEG and Siemens.

But although Cologne is landlocked and the lighthouse factory bankrupt, the tower has been a good advert for the maritime business. Carpenter Max Dietrich Bahr, 74, a former sailor, makes ship's steering wheels in his small workshop located in the car park below the lighthouse. 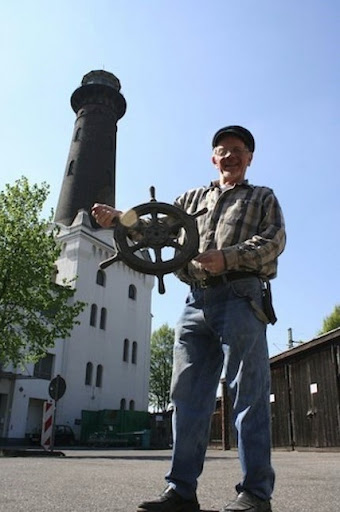 And there is even a shipyard nearby - even though the city and even the nearest river and lake is miles away.

Now the former lighthouse factory is a furniture warehouse, and the factory chimneys that once dominated the skyline have vanished and been replaced by modern buildings. But the Helios lighthouse - the only genuine functioning lighthouse that never saw the sea - has remained.

Local councillors are now considering what to do with the building including the possibility of allowing tours and exhibition inside, and are even considering a plan to put a small beach bar with imported sand in the area.

Andre Schmitz said: "Who knows, with global warming it might still end up by the sea."

Just an amusing bit of history to brighten your Sunday.

Sounds like a good place for a little café, some art, and a good view from the top.