As I write this, Miss D. and Jenny S. are on their way by car from Anchorage to Valdez, Alaska, for the annual May Day Fly-In. I wish I could be there too, but unfortunately I'm stuck in the lower 48 . . . (pout, sulk, etc.).

The May Day Fly-In is a bit of a misnomer. It's always held on the weekend of Mothers Day, freeing up the previous weekend for the annual Alaska Airmen's Association Trade Show and Conference. No problem, of course - most of those attending the Fly-In attend the Trade Show as well. Miss D. helped organize it, and had some amusing stories of events (like telling USAF officers where to park their C-17's and F-15's and other assorted expensive ironmongery!).

One of her best tales concerned the annual aircraft raffle held for the benefit of the Association. This year, the prize was a highly customized Supercub bush airplane. 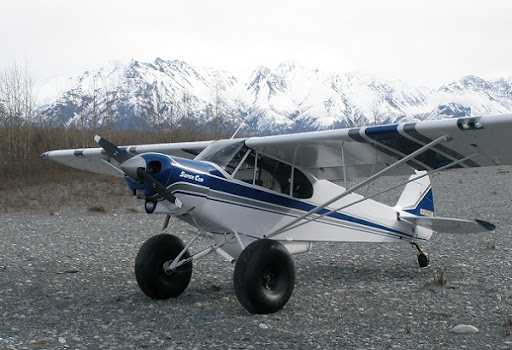 The Supercub raffled off for the benefit of the Alaska Airmen's Association.
Details of all the modifications and upgrades to the aircraft may be found here.

Apparently the gentleman who won this year was a very popular winner. A couple of years ago his aircraft was destroyed when another plane bounced the wrong way on landing and crashed into it. He hasn't been able to replace it, probably because of the very high cost of a good bush aircraft. Seems he bought five tickets for the raffle to support the Airmen's Association, not expecting any results (they sell 7,500 tickets each year at $50 apiece, or 5 for $225), and flatly refused to believe it when they called to tell him he'd won! Needless to say, he's a very happy camper right now. (Who wouldn't be, winning a quarter-million-dollar aircraft for an investment of a mere $225?) Gives me a nice warm fuzzy feeling to see someone's luck change for the better like that.

The Fly-In attracts most of the bush pilots in Alaska. They spend the weekend talking shop, eating, drinking, and displaying their skills at short take-offs and landings (essential in the environment in which they fly every day). Here's a video clip of highlights (and one low-light) from last year's competition.

That was an expensive 'oops' . . . not much airframe damage, but a new propeller and an engine overhaul (made necessary by an over-torqued drive shaft) don't come cheap!

Good luck to all those taking part this year, and I hope everyone has a great time.

Way back in the stone age when I was getting my A & P, I learned a situation like the one pictured or any other type of sudden stoppage would require a tear down so the crack could be magnafluxed. Frequently a new crankshaft and prop would end up on the bill. When you're at that point, the entire engine has already been disassembled so the maincase could be split.

So strange to see "bushplanes" with wheels. My experience has all been in float equipped stuff in Northern ON, where you land on water cuz, well, there's a lot of it.

Watching an Alaskan pilot with tundra tires touch down on a river, then run up onto a gravel bar,was pretty scary the first time a saw a film clip.

I saw a crankshaft from an engine which had experienced a sudden stoppage like that, and an image from when it was magnafluxed showing a crack spiralling around the prop flange making three or four complete revolutions. There was no visible indication of it, either.

Most of the planes you see in that clip came back again this year. Those guys are amazing!