It's reported that the V-22 Osprey tilt-rotor aircraft, currently in production for the US Marine Corps and US Air Force, may be offered by Boeing as a replacement for the helicopters used to transport the President of the United States. 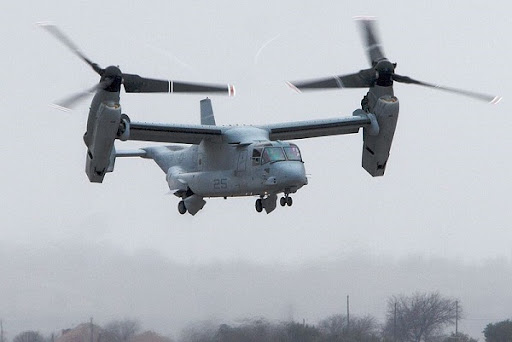 Unfortunately, the V-22 has a very strong downdraft indeed from its twin engines. As an illustration, CNN reported today that 10 people were injured by flying debris during a V-22 demonstration flight in New York. Here's a video clip showing how the aircraft kicked up dust and knocked down tree limbs as it came in.

As Al Kamen commented in the Washington Post not too long ago:

Asked whether the craft can land on the White House lawn, Marine Col. Greg Masiello, the program manager for the Osprey, said: "It fits, by the way."

But given the aircraft's history, will the Obama administration go for it? No question. The Osprey, "when landing, will unleash high-speed sod clumps in all directions," said Winslow T. Wheeler of the Center for Defense Information. So the Osprey "will have the added -- much to be desired -- effect of scattering the White House press corps to end those pesky shouted-out questions as the POTUS ambulates to the White House back door."

What was that sound? Ah, yes. Obama press secretary Robert Gibbs lunging for an order form.

Osprey's a better bird for POTUS. Very useful sprint & cruising speed if needed makes for harder target to take out. Extra range (read as "endurance") useful for standing by ready to do the Angel of Life pickup, should it be needed -- and we come back to that dash speed, which allows the standby orbit to be farther out.

HOLY CRAP IT'S THOSE HELICOPTERS FROM GHOST IN THE SHELL.

That is SO cool!