I've written in the past about luxury VIP interiors for airliners, which are custom-produced for individual buyers. I've just found an article in the Smithsonian's Air & Space magazine that gives details of how these special interiors are prepared. Here's a brief extract.

Engineers at Lufthansa Technik recently faced a tough problem: How do you install a 300-pound bronze racehorse in a large private jet? The client insisted that it be secured to the cabin floor by only one leg. Solving that type of problem can make a company’s reputation in the demanding business of creating aircraft interiors for the wealthiest individuals in the world.

Luxury completions, one of the services provided by aircraft maintenance, repair, and overhaul facilities, is a global business, and currently one of the healthiest sectors of the aircraft industry. In one particularly active center, at EuroAirport near Basel, Switzerland, three companies employ 3,000 workers to complete new aircraft or to refurbish gently used ones, a process that can last two years and add 10 tons of innards to a hull that either arrives hollow or is gutted after it lands.

“Our commercial work is still high-quality of course, but it’s fitness for a particular purpose,” says Clark Goodison, a Scotsman who manages the master craftsmen in the production support shops for Lufthansa Technik Switzerland. “You get on and off an airliner within two hours. You have your sandwich and the seats are comfortable enough. But the Sultan of Brunei, who might fly his aircraft four times per year, wants everything to be perfect. The VIP completion is about the precision. It’s the quality, it’s the finish, and a lot of the feel is artistic. Our staff look three times at a task before they decide to do it.”

To ensure consistent trade skills and promote a company culture, Lufthansa Technik launched an apprentice program more than 50 years ago. This year, some 800 apprentices, ages 16 to 20, work in its German plants. Some, after completing internships subsidized by the German government, will work under a master for months to years before taking on a less supervised role in the company. 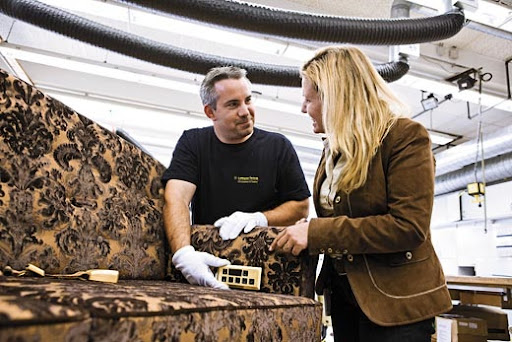 Karl Eikelmann is the senior director of production at Jet Aviation Basel. “We tell recruits that in cars you only do production, and it’s always the same work. Here, you don’t see the same work twice,” says Eikelmann. Most of the 60 specialists in the Jet Aviation upholstery shop came from automotive factories (a common recruiting ground for all three companies). The shop sews every stitch needed in the aircraft cabin, from the carpet to the sofa to the window shades to, for the very particular client, a fine fabric lining for dresser drawers.

Before any of the craftsmen begin work, however, interior designers determine the clients’ needs and desires. The consultation ordinarily takes months.

Completions firms try to accommodate all requests. “Some customer may ask that all the controls on his main chair in the cabin for the entertainment system be transferred from the right to the left side, and that’s just fine with us,” says Lufthansa’s Goodison. “Maybe he wants to sip his champagne with the other hand.”

Part of the process may include constructing a full-size mock-up in white Styrofoam, right down to the king-size bed, conference room, and gourmet galley, to help the customer’s designer picture the floor plan. 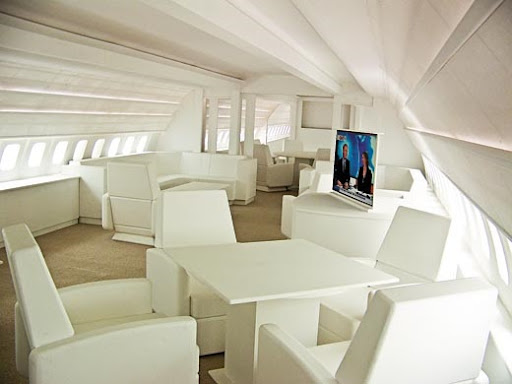 At Jet Aviation, such a mock-up costs $600,000 on average, and stays intact just long enough for a walk-through. Since most design is proprietary, and many furnishings unique, the mock-up is then destroyed.

Some requests just can’t fly. Lufthansa Technik had to reject a Middle Eastern client’s demand for an open flame in the cabin, reminiscent of a nomadic desert campfire. The company offered an alternative — an electrical appliance that created an artificial fire — but the project was abandoned. Jet Aviation worked exhaustively to craft a sofa designed like an immense seashell, but could not build it to meet weight and height requirements, or the regulation that such seats must withstand 9 to 16 Gs.

But Lufthansa was able to make one dream come true: a night sky rendered in tiny diodes, to imitate a constellation the customer had enjoyed one special evening.

Lufthansa Technik offers a completion for the Airbus Corporate Jet or the Boeing Business Jet, with a cabin starting at six million euros ($8.5 million). A high-end completion can add $30 million to a hull that costs $60 million empty, according to director of marketing and sales Thomas Foth.

“Of course this depends on the materials,” explains AMAC’s Ruedi Kurz. “One customer wants mother of pearl inlay on all of the cabinets. Another wanted all of the carpets to be silk, and that’s another half-million right there.”

“Smaller business jets can be completed in the lower eight-figure range,” says Wolfgang Reinert, a spokesman for Lufthansa Technik. “The bigger an aircraft is and the more individual a customer’s wishes are, the more expensive it will be.” Wide-body hulls, such as the Airbus A340 or the Boeing 747, “can reach the nine-figure range.”

No figures have been confirmed for the completion of the so-called “Flying Palace,” a $320 million Airbus A380 with an interior designed by British firm DesignQ for Saudi Prince Al-Waleed bin Talal. One aircraft interior design firm estimated that finishing the two-level, 6,000-square-foot interior will cost $150 million. 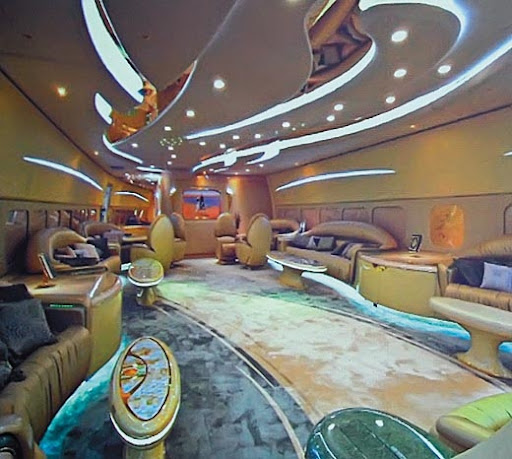 Such high-profile projects—Prince Al-Waleed made headlines by becoming the first individual to purchase the enormous Airbus—may be good for business, but AMAC’s Schramm says that word of mouth is the completions firm’s best marketing tool.

“The customers know each other, and they know each other’s pilots,” says Schramm. “They go to the Gulfstream operators’ conference and the other operator groups. They go to EBACE [a European trade show]. They know who is getting service at each of our competitors.”

“I have customers contacting me, I have never contacted or heard of them,” says Ruedi Kurz. “It’s a different kind of corporation than a typical U.S. one. In these regions, it’s more like a private family operation.”

Ingenuity may be the most important qualification for workers in the luxury completions industry today. That 300-pound bronze racehorse? Lufthansa Technik engineers found a way to install it in the private jet and still meet all the safety requirements.

Nice if you've got the money, I guess . . . although at the upper end of the market, paying $150 million for an interior, on top of at least that much (probably more like twice that much!) for the plane, produces a final price that makes me gulp! Clearly a toy for only the richest of boys.

But does the beautiful upholstery come with ugly seat belts?

How do you install a 300-pound bronze racehorse in a large private jet?

The triumph of raw income over taste, right there. What a bunch of maroons. Then again it is their money to spend as they please, and if they're keeping the spirit of craftsmanship and attention to detail alive, so be it.

That's what makes me feel all nice and fuzzy about $3+/gal to get to work. Thanks Peter. :)


well.. that and the Wahabbist madrassas.