I owe my friend Jenny a big debt of thanks for posting this music video on her blog a couple of days ago. It's "Roots" by the English folk song duo Show Of Hands.

Captivating, isn't it? I'd never heard of Show Of Hands before, so I started looking around the Internet. I found their Web site, which lists many albums they've produced together over the past decade or more. 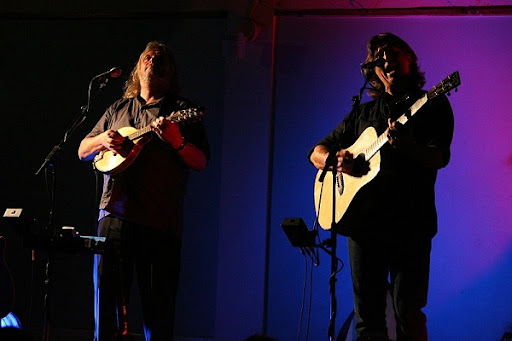 They feature modern compositions as well as old favorites, with an emphasis on English themes and settings. There are many of their videos on YouTube. Click on the link for a list.

Here are three more clips. The first is from their DVD 'Stairway to Devon' (groan!), the duo speaking about their music, interspersed with short excerpts from some of their songs.

Next is their song 'Country Life'.

Finally, they're joined by Miranda Sykes on double bass and vocals to sing their 'Tall Ships Medley'.

I have to conclude by saying that Jenny, to whom we owe our introduction to Show Of Hands, is a musician in her own right. She's also one of the most interesting people I know. More than once, she's broken free of past chains and attachments and set out to re-make her life, following her dreams and abandoning the security to which so many of us cling. She's a lady I'm proud to call my friend. Jenny, you rock!

Interesting :-) I'll be back to listen to more of the videos!