It seems the Texas Commission on Environmental Quality recently received a complaint that a certain Mr. David Cousins had been allowing hunters on his property to relieve themselves in the woods, having provided no proper toilet facilities for their use. The Commission wrote to the County Judge, Mr. Daniel Burkeen, to ask him to investigate. 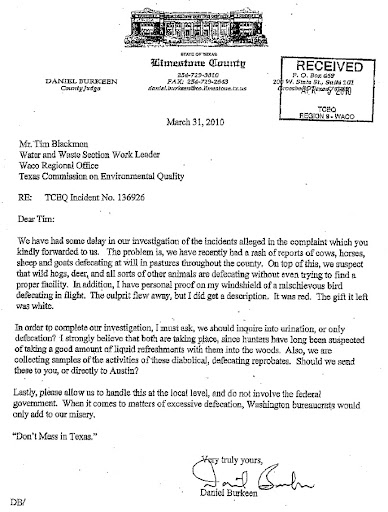 Beautiful, isn't it? According to the Southeast Texas Record:

... Judge Burkeen said his reply to TCEQ, which has become something of an Internet sensation, has inspired countless people, including land owners and even politicians from all over the nation, to call him in support.

"It's all been positive," said Judge Burkeen. "Citizens that have had to deal with state agencies were especially (entertained)."

He added that even some state agency officials were tickled.

Judge Burkeen told the Record that the hunting lodge owner has since installed a bathroom, but that he is no longer following up on whether hunters are choosing to use the toilet or bushes.

I think Judge Burkeen should run for Congress or the Senate. We need more like him in Washington!

wow, a guy who didn't run for cover.

This made my day! Proud to be a Texan!

Never, but never, mess with an old county judge. It just ain't worth the pain. :)