Today's Doofus is from Arizona.

According to the Mohave County Sheriff's Office, 55-year-old James Lyle Pierson failed to kill himself when he crashed his car off a cliff in an attempt to create an explosion that -- if it had worked -- probably would have blown him to smithereens.

Pierson packed his car with propane bottles, gasoline, and shotgun shells, which were rigged to an ignition device, before he took the plunge down a cliff about eight miles from Oatman. 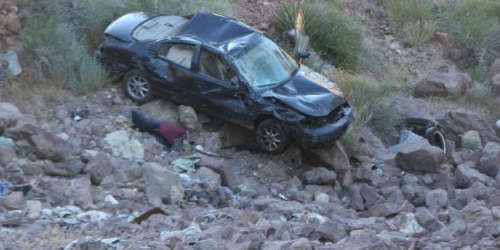 Mohave County police officials say the reason the car -- and Pierson -- never blew up was because the ignition device failed.

After crashing his car off the cliff, and realizing that his suicidal plans had been thwarted, Pierson walked eight miles to Oatman, where he called authorities.

Pierson was taken to the Valley View Medical Center, where he was treated for his injuries and released.

Pierson was charged with disorderly conduct involving a dangerous instrument, a felony, and taken to the Mohave County Jail.

Why is it that would-be suicides are so very often weirded-out by their desire to end it all? I mean - to go to all that trouble . . . and then fail anyway! There's also the added risk to innocent lives; those who might have been affected by a premature explosion, the rescue workers who had to disarm the car, and so on. Why put them at risk? This sort of selfish don't-care-about-anyone-else attitude is something I've seen very often in wannabe suicides. I simply can't understand it.

Why did he give up after it failed to go off the first time?

Depression is a profoundly self-centered state, which is one reason it's so difficult for loved ones to deal with it. Suicide is its logical conclusion. The suicidal are very nearly incapable of not being completely selfish.

One round, one kill. Why complicate the issue?