A ship that can't be allowed to die!


I'm appalled to read that the USS Olympia, the flagship of then-Commodore George Dewey at the Battle of Manila Bay during the 1898 Spanish-American War, is so seriously dilapidated that she may sink at her moorings. Astonishingly, no money is available to repair her. She may even have to be sunk as an artificial reef!

The old warship has been part of Philadelphia's waterfront for 50 years and left lasting impressions on thousands of visitors who heard gripping stories of its role in the Spanish-American War. 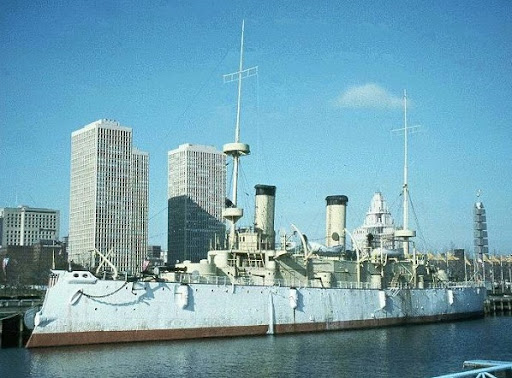 Now the Olympia - the last surviving vessel from that 1898 conflict - could face an ignoble end as an artificial reef off Cape May if a new benefactor cannot be found.

The Independence Seaport Museum and the Navy have already checked with officials of New Jersey's Artificial Reef Program on the possibility of sinking the ship, once a source of national pride.

"Another option would be scrapping Olympia," said James McLane, interim president of the museum, which owns the ship and is adjacent to it at Penn's Landing. "But the Navy has told us that 'reefing' is better because it would allow divers to go down on it and would preserve Olympia."

The museum can no longer afford the ship's upkeep, McLane said. At least $20 million is needed to tow, restore, interpret, and endow the deteriorating vessel.

"We have a couple people we're talking to who might take the ship," McLane said, "but these things don't move with great speed."

The ship will be open until the end of September, then closed while its future is determined, McLane said.

"This may be the last summer for people to visit," he said. "They should come to see it while they can."

Talk of making the Olympia part of New Jersey's reef network disappoints ship supporters such as Harry Burkhardt, a merchant marine captain and steam-engine expert who is a volunteer on the vessel.

Burkhardt is president of Friends of the Cruiser Olympia (www.fotco.org), which is trying to raise money for preservation of the ship. The group got its nonprofit status this month and has begun receiving pledges and interest from individuals and corporations, Burkhardt said.

"We want to take over its ownership and operation," he said. "We have a long list of ideas, but we have to save the ship to implement them."

Burkhardt, 53, of South Philadelphia, said he would turn the Olympia into a self-sustaining museum with a living-history crew and education programs for inner-city children.

"I think what's happening is a total disgrace," he said. "The Liberty Bell has a crack in it, but we don't melt it down. The Statue of Liberty turned green with corrosion, but we don't throw it away."

The Olympia "was a symbol of America's might and freedom," Burkhardt said. "Now she's a symbol of negligence."

Concerned about the condition of the Olympia, the Navy sent a letter to the museum last May asking about plans to dry-dock the vessel for the necessary maintenance.

On the water line, small portions of the Olympia's half-inch steel hull have corroded to an eighth of an inch and must be monitored continually. Water leaks through the deck into the interior, causing further rust.

"We have cared for Olympia lovingly," McLane said. "We have put $5.5 million into it and spend money on it every day."

The Olympia was authorized in 1888 and commissioned in 1895. The state-of-the-art vessel led five other U.S. warships into Manila Bay in the Philippines on May 1, 1898, and fired shots in a battle to wrest control of that country from the Spanish.

USS Olympia in Hong Kong, April 1898.
Note that her white paint has been replaced with gray in anticipation of war.

Navy Commodore George Dewey stood on the bridge of the ship and uttered the famous words: "You may fire when you are ready, Gridley."

Under Dewey's command, the U.S. fleet destroyed 10 Spanish cruisers and gunboats in hours without losing an American life.

Today, the vessel is the world's oldest floating steel warship.

"The Navy has been in discussions with the museum to come up with a disposition plan if they can no longer operate it," said Patricia Dolan, a Navy spokeswoman. "Any plan for disposal of the vessel - scrapping or reefing - will have to be approved by the Navy."

The thought of scuttling the naval time capsule - filled with paintings, photos, and artifacts - has raised the ire of historians.

"It will be a national disgrace and major embarrassment for Philadelphia and Pennsylvania if Olympia is disposed of by scrapping or being sunk off the coast of New Jersey," said naval historian Lawrence Burr, who has produced documentaries and written four books, including U.S. Cruisers 1883-1904: The Birth of the Steel Navy. 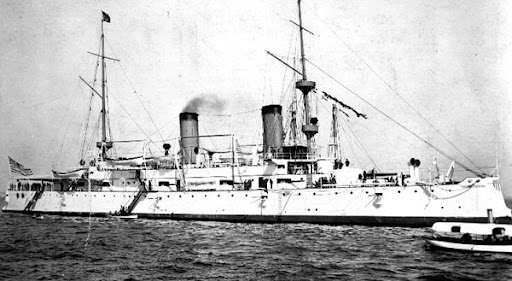 "Neither the Spanish navy in 1898 nor the German navy in 1917-18 was able to sink Olympia," he said. "It will be ironic if the State of New Jersey is able to sink this unique historic warship that has been in the care of Philadelphia and Pennsylvania for over 50 years, and who have benefited from its role as a tourist attraction. . . .

"If sunk, she will only be seen by a small elite who are able to dive, with the risk that she will be plundered for souvenirs," he said.

Also expressing disappointment was the nonprofit Theodore Roosevelt Association in Oyster Bay, N.Y. Congress chartered the group in 1920 to perpetuate the legacy of Roosevelt, who was assistant secretary of the Navy before the Spanish-American War and ordered the Olympia furnished with extra coal so it could be sent to the Philippines. Roosevelt resigned from his office and served as a colonel in the Rough Riders during the invasion of Cuba.

The possible sinking of the Olympia "is an outrage," said Howard Ehrlich, executive director of the association. "You would think veterans groups would get together and lobby the Navy to save the ship."

I'd like to ask all of my readers who share my interest in military history to approach any US Navy representatives they may know, as well as their Congressional representatives and Senators, to request that USS Olympia be saved for posterity. The $20 million cost quoted to restore her is a drop in the bucket, figuratively speaking (it represents just three one-thousandths of one per cent of the 2010 US defense budget request of $685.1 billion dollars). For so important a piece of US Naval history, I'd consider that money - even double or triple that sum - well spent.

I've made a point to go down and see her a couple of times; I hope they can save her.

She is truly breathtaking when you see her close up.

I was on her twice in the 60's. I took my uncle there when they mothballed his ship, USS Hunt, in the Philly Navy Yard.

All the ships on the waterfront are in sad shape.

The Olympia just refects the decay of a once great city. Very sad.

Take the ship to NYC alongside the USS Intrepid.