Back in March I reported on the Fisherman's Friends, a singing group made up of Cornish fishermen who perform traditional sea shanties. They'd been 'discovered' by a recording executive, and had just signed a contract to produce an album.

It seems their album's become a smash hit in England. They're booked to perform at this year's Glastonbury Festival of Contemporary Performing Arts; Ealing Studios wants to make a film about them; and someone wants to write a book about them. The beauty of it is, this sudden fame hasn't gone to their heads at all. In a very funny interview, Petronella Wyatt of the Daily Mail found that they hadn't changed at all. Here's an excerpt.

Where is my lobster?' demands Jeremy Brown, lead singer with Britain's hottest new pop act. 'It's on the floor,' I reply, pointing. 'It crawled out of the basket.'

'Well, go and catch it,' he retorts heatedly.

Sadly, we are not in some swanky London restaurant frequented by the decadent glitterati, sipping champagne before our seafood platter arrives. Jeremy catches his seafood platter by hand - every day of the week except Sundays.

We are on his fishing boat, the Free Spirit II, navigating the choppy emerald seas off Cornwall. The wind is stinging and I have just been nipped by a crustacean. My job is to measure the lobsters to determine if they are large enough to sell and then put rubber bands round their claws.

Frankly, this is not my idea of being a groupie. But then Jeremy's ten-strong group, The Fisherman's Friends, is not your average boy band. For a start, they have a combined age of 562. Some of their songs, which are traditional sea shanties, are even older than they are.

They may have just signed a £1 million record deal with the company that brought us Abba and U2, been on prime time television on three continents and have netted the best slot at the Glastonbury Festival this summer, but fame, it appears, has yet to spoil these old salts. 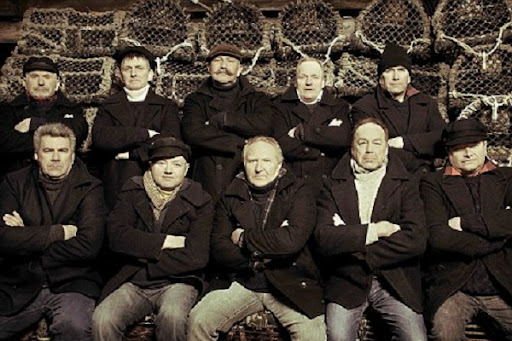 All are Cornish born and bred and live and work in the thimble-sized village of Port Isaac. Three are fishermen, five past and present members of the local lifeboat crew, and one an ex-coastguard and the ex-harbourmaster. Jon Cleave runs a village shop called The Boathouse, which sells nautical clothing, and Nigel Sherratt has an icecream-coloured tearoom, Cupcakes.

There doesn't seem much chance for louche living - if The Fisherman's Friends keep odd hours it's because of the fish. The Brown brothers put out to sea at dawn; just when most pop stars are falling into a stupor.

Yet, to the group's collective astonishment, Ealing Studios in West London has just announced its intention to make a film about them, and Jon has just been informed that their lives are to be the subject of a book.

'Dunno why,' he says, scratching his balding pate and hugging a beer. 'I ain't taken no drugs.'

The Fisherman's Friends, who began singing together for fun 15 years ago on the harbour slipway and inside the nearby Slipway Hotel, seem not to have read the rock 'n' roll rule book. As far as this lot are concerned, boy bands are the metal bits that secure those things that bob on the sea, and a groupie is the plural of a grouper.

Trevor and Peter, who is a sprightly 76, have wandered down to the Slipway Hotel to join Jon for a pint. I ask them what it feels like to be millionaires? They all guffaw. Trevor tells me: 'The record deal was a really nice surprise but we don't want to change our lives.'

So far, after studio and recording costs, marketing and distribution bills, they have only seen thousands apiece. Jeremy says: 'If this thing goes ballistic we might get to be millionaires. But my wife isn't getting any diamonds. No way. She'll keep on running our lobster and crab stall.'

Jon, who has a splendid, whiskery moustache and looks like Terry Thomas's older brother, insists: 'I haven't been splashing out, either. I've got a wife and three sons. They'd kill me if I bought a Porsche or a case of champagne.

'Seriously, the things that go with money might destroy my life here and I would hate that. I'm a simple Cornishman.'

But wouldn't they even like holiday houses abroad? Trevor chokes into his beer. 'What would I be doing with abroad? When they made us go to London for the CD it was bad enough.'

Trevor's niece, Rachel Grills, who works in the Slipway Hotel, said she fell off her chair when she heard her uncle was going to be a pop star. 'We were really pleased, but really surprised. None of them will move away. Anyway, we wouldn't let them.'

Is the hotel mobbed by screaming girls? I ask. 'They're a bit old for that,' grins Sue from the Stowaway Tea Shoppe. 'It's not like they will go off and chase girls.'

Peter demurs. 'Why shouldn't I chase girls?' The others make a sound like an explosion. 'You know what he's doing at the moment?' whispers Trevor. 'Trying to make a topiary anchor for his garden!'

I leave them to their beers and trudge off with Jeremy, who is anxious to replenish his seafood stall. 'How are your sea legs?' he asks.

'I haven't asked them lately,' I reply.

Jeremy grimaces and hauls me aboard his boat. 'Quite calm today,' he says, looking at some enormous waves.

'Don't worry. If I'm wearing my lifejacket, it's time to get worried. My dad was a fisherman and I have been a fisherman since I left school.

During the lobster season, Jeremy catches around 450 crustacea a day, which he sells for £22 per pound.

'The price has gone down because of the recession,' he complains, throwing me a pair of waterproof dungarees in a foul shade of yellow.

'Let's get to work, then. Found your sea legs yet?'

The boat hits a wave and I feel queasy. 'They may be in my hotel bedroom. Can we go back?'

Jeremy assures me briskly: 'You'll be fine. Just don't catch your foot in that rope you just stepped on. It'll drag you out to sea and you'll probably die.'

I start thinking I was wrong about The Fisherman's Friends. A day with them is more dangerous than a night with Pete Doherty.

Our thoughts return briefly to their pop careers. Do they often feel out of place in this unfamiliar new world?

'Well, when they photographed us for the album cover some of the lads were worried they'd be dressed up as mermaids,' Trevor remarks happily. 'I guess you could call us odd.'

'Are they going to give us drugs?' Peter asks me anxiously.

In some ways The Fisherman's Friends are a publicist's nightmare. But in this world of phoney chicanery and manufactured pop stars, this buoy band, to me at least, is an absolute dream.

For those who want to know what they sound like, here's the first of a three-part series of video clips of a live 'concert' given by the Fisherman's Friends at Port Isaac last year.

If you liked the first part, Parts Two and Three are at the links.