The final curtain for the last of the Ziegfeld Girls


The last living Ziegfeld Girl has died. The Telegraph reports:

Doris Eaton, who died on May 11 aged 106, was the last of the Ziegfeld Follies girls and subsequently became a star on Broadway in her own right. 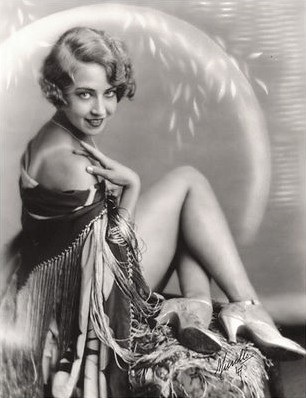 As one of Florenz Ziegfeld's troupe of alluring, long-stemmed showgirls, she danced on the New York stage between 1918 and 1932, donning extravagant costumes for a series of lavish spectaculars which mixed Broadway show, vaudeville, burlesque and striptease.

Established in 1908, Ziegfeld Follies featured leading entertainers such as WC Fields, Eddie Cantor, Fanny Brice and Will Rogers. Doris Eaton was one of some 30 or 40 beautiful female dancers who performed elaborate chorus numbers composed by Irving Berlin, clad in costumes by the Art Deco designer and illustrator Erté.

Doris Eaton in particular was said to have "ideal American lips", and one newspaper even reported that her toes were insured for $10,000.

Although only 14, Doris lied about her age and was hired ... as the youngest Ziegfeld recruit. During her first year in the chorus line she worked with a rehearsal pianist called George Gershwin, then a complete unknown.

By the time she had become a principal dancer in 1920, she had become a favourite of Florenz Ziegfeld himself. "He was a quiet person and was always kind of fatherly in his manner toward us," she remembered.

In 1921 Doris made her film debut, opposite Billie Dove, in At the Stage Door, and took the second lead to Pearl White in The Broadway Peacock (1922). Then came an offer to travel to England to become a leading lady for a film-production company established by the actor Donald Crisp and the director Sidney Morgan.

Doris took the lead in three films shot in 1922 – His Supreme Sacrifice, The Call of the East, and Tell Your Children – before returning to Broadway roles. In 1925 she featured opposite Al Jolson in Big Boy.

With the advent of the talkies, audiences flocked to the cinema, and for a while theatre work dried up. Doris left New York for Hollywood, where studios were looking for Broadway stars to replace foreign contract players of the silent film era. "The microphone killed any chance of them making it with their thick foreign accents," Doris Eaton noted.

When her Hollywood career failed to take off, she played a series of small roles in various low-budget films before returning to New York, where the Great Depression was having a dramatic impact on the number of shows being produced. She was, however, cast in Page Pygmalion (1934) and then joined an all-star cast for the musical Merrily We Roll Along, which ran for more than 150 performances.

In 1998, when she was living in virtual obscurity, a film producer making a documentary about Florenz Ziegfeld discovered her whereabouts. He arranged for the 5ft 2in centenarian to return to Broadway to star at the New Amsterdam Theatre, where she had first appeared 80 years earlier, joining four other Ziegfeld veterans in the Easter Bonnet competition, an annual Aids charity fund-raiser. "I was the only one who could still dance," she said.

Her subsequent return performances each year became hugely popular, and in April 2009 she danced to Irving Berlin's Mandy (a song she had first performed in 1919) and shared the stage with the actors Susan Sarandon and Jeremy Irons.

In 1992, when she was 88, Doris Eaton graduated with a degree in History from the University of Oklahoma. In 2003 she published her autobiography, The Days We Danced, followed three years later by a second book of memoirs, Century Girl. She was awarded an honorary doctorate by Oakland University.

Ms. Eaton's final appearance on stage was as recently as April 27 this year, at the 24th Annual Easter Bonnet Competition, produced by and benefiting Broadway Cares / Equity Fights AIDS. Here's a video clip of her speech on that occasion.

Rest in peace, Ms. Eaton - and may the dancers in Heaven please you!