I'm not so much amazed as disgusted by the bling attached to everyday objects like cellphones and the new iPad by a British design house. Goldstriker International and its owners/designers, Stuart and Katherine Hughes, offer the most incredible designs - and prices - on their Web sites.

Top of the industry technology 55” screen with the most beautiful materials used. 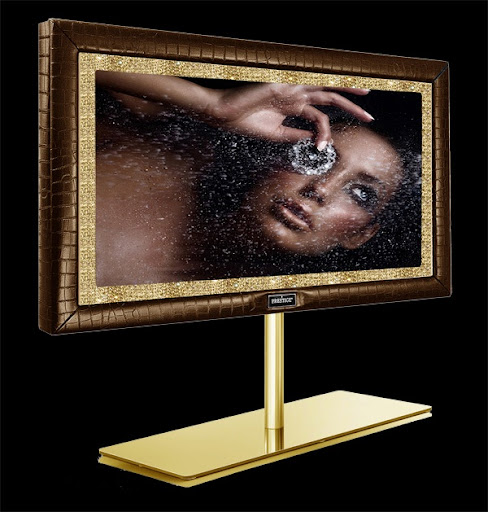 The base and outer frame consist of circa 19 kilograms of solid 22ct gold, outer frame is adourned with 48 brilliant round cut 0.75ct IF Flawless diamonds with the remaining area set with Aventurine & Topaz. The inner screen layer is made up from Alligator skin , all hand sewn. A limited edition of only 10 to be made.

The price? A mere one million pounds sterling (about US $1.477 million). 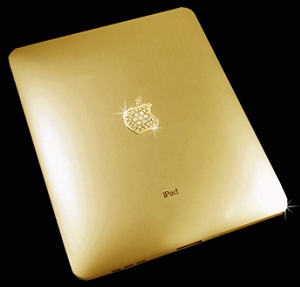 For the most elite individual, we bring you the worlds 1st solid gold and diamond ipad. Encrusted with 25.5 cts of ‘I'F' Flawless diamonds, a magnificent total of 53 individually set sparkling gems dwell beautifully in their solid 22ct Apple logo. The rear and screen surround are made from a single piece of solid 22ct gold, weighing an immense 2,100 grams.This most luxurious ipads appearance is outstanding even down to the precise polishing to reveal its most beautiful harmonious appearance. A magnificent combination of top of the industry technology and unrivalled craftsmanship was invloved in creating this masterpiece.

This item is of a limited edition of only 10 units to be made.


At least they've selected the current top-of-the-line iPad model as the basis for this bling - but that model retails (from the Apple store) for a mere $829 (US price). Their golden version will set you back just a bit more than that . . . wait for it . . . a mere £129,995 (about US $192,000) - or 23,160% more than the base unit! And what happens when a new model's released, with slightly different dimensions? Do you throw away the gold outer shell and buy another one to fit the new model?

I find myself more than a little nauseated by such conspicuous consumption, and by those catering to it. I guess I've been in too many Third World countries, where the combined price of the TV set and iPad shown above would feed thousands of families, or provide medicines to treat equally many patients, or provide clean water for entire villages and regions. I suppose those who've got the money can spend it as they wish . . . but I think the price they'll ultimately pay is a large portion of their souls as well. To me, there's something almost demonic about such bling.

Labels: Boys and their toys, Business and Commerce, Disgust, The Mind Boggles
Email ThisBlogThis!Share to TwitterShare to FacebookShare to Pinterest

It is the purchaser's money to spend as they wish. I personally reckon anyone with that much money could hire someone to teach they a little taste, if they ever have the urge to buy something like that.

In any case all the gold can be recovered later and used for something practical.

It's hardly as if that (metallic) gold shell is going to help the 3G and wireless reception on the device. Somebody is going to pay a lot of money to learn the hard way.

Along these lines, I DON'T see the appeal of Rolex {& other overpriced timepieces}, or purses such as Coach, D&B, etc.

Um... conspicuous consumption is right... I cannot imaging them ever using the ipad where anyone can see it.

While the money could feed the village, the gold can't. Perhaps the broken window is better than no window at all?

As to the price the soul bears, I must confess the difference between that iPad and my $5 mocha is a difference of degree only, not of kind.

In defense of Coach, their bags last forever, so they are worth most of the investment.

As for the gold and otherwise decorated items, they make me a little uncomfortable. I get the same feeling when I look at pictures of 10,000 square foot log "cabins" that are only used for a few months of the year, by three people and a few of their friends. Yes, it is their money to do with as they please, but I keep thinking that there is an element of hubris and tempting fate involved as well. Poor stewardship also comes to mind.
LittleRed1