More than two years ago I wrote about how some organizations were taking Sony Playstation 3 consoles and wiring them together, running the Unix operating system, as a low-cost way to get really high-end processing power. It looks as if the US Air Force Research Laboratory did likewise: but now it, and others doing the same thing, have been caught short by Sony's latest move. Ars Technica reports:

The Air Force is one example. The Air Force Research Laboratory in Rome, New York picked up 336 PS3 systems in 2009 and built itself a 53 teraFLOP processing cluster [shown below]. 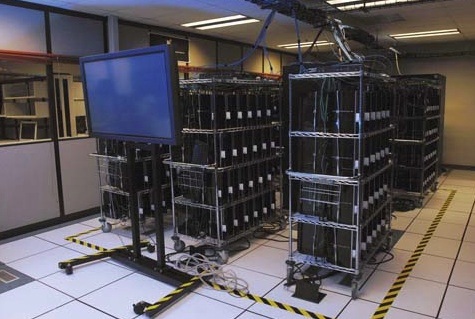 Once completed as a proof of concept, Air Force researchers then scaled up by a factor of six and went in search of 2,200 more consoles (later scaled back to 1,700). The $663,000 contract was awarded on January 6, 2010, to a small company called Fixstars that could provide 1,700 160GB PS3 systems to the government.

Getting that many units was difficult enough that the government required bidders to get a letter from Sony certifying that the units were actually available.

Another grotesque waste of taxpayer dollars? Exactly the opposite, according to research lab staff. Off-the-shelf PS3s could take advantage of Sony's hardware subsidy to get powerful Cell processors more cheaply than via any other solution.

The result was the 500 TeraFLOPS Heterogeneous Cluster powered by PS3s but connected to subcluster heads of dual-quad Xeons with multiple GPGPUs.

The Air Force team ordered the hardware, spent days unboxing it and imaging each unit to run Linux, and then... Sony removed the Linux install option a couple months later. (One can only imagine what happened to those 2,000 PS3 controllers and other unneeded accessories.)

Sony's decision had no immediate impact on the cluster; for obvious reasons, the PS3s are not hooked into the PlayStation Network and don't need Sony's firmware updates. But what happens when a PS3 dies or needs repair? Tough luck.

We checked in with the Air Force Research Laboratory, which noted its disappointment with the Sony decision. "We will have to continue to use the systems we already have in hand," the lab told Ars, but "this will make it difficult to replace systems that break or fail. The refurbished PS3s also have the problem that when they come back from Sony, they have the firmware (gameOS) and it will not allow Other OS, which seems wrong. We are aware of class-action lawsuits against Sony for taking away this option on systems that use to have it."

A similar issue will confront academic PS3 clusters, which have sprung up in labs across the country. In 2007, a North Carolina State professor built himself a small cluster that he cobbled together after "he spent a few hours one day in early January driving from store to store to purchase the eight machines."

The University of Massachusetts has 16 machines networked into a cluster called the "Gravity Grid," used to look at gravitational waves and black holes. According to the physicists at UMass, the PS3's "incredibly low cost make[s] it very attractive as a scientific computing node, i.e., part of a compute cluster. In fact, it's highly plausible that the raw computing power-per-dollar that the PS3 offers is significantly higher than anything else on the market today."

All such projects will last as long as the machines survive or used machines are still available, but new hardware can't be added and refurbished machines can't be used. A class-action lawsuit has recently targeted Sony for removing a promised feature retroactively, though the issue is unlikely to be decided anytime soon.

As a former computer systems professional, I'm sorry that Sony has seen fit to disable this use of their consoles. I hope that pressure from users such as the USAF Research Lab will lead them to reconsider. The processing power of such consoles is much cheaper per unit than buying special dedicated high-end workstations, and the ingenuity shown by systems designers in adapting games consoles to high-end processing needs deserves recognition, I think.

My understanding of this my be totally wrong, but I know for a fact that you can swap drives from one PS3 to another as easily as you can move a hard drive from one PC to another. From what I understand, it should be trivial to move a hard drive from a dead PS3 to a new PS3, neatly replacing any dead hardware. I'm not sure about dealing with bringing new PS3s into an existing node.

*Note, I own a 1st gen PS3, but it's just a game machine and as such, I've never played with Linux installation or any of the more esoteric features talked about here.

That's why there's a lawsuit for the removal of Linux from the PS3s. :)

The processing power of such consoles is much cheaper per unit

Bull's-eye. I leave mine to run Life with Playstation (AKA Folding@Home) most of the time, but I think Sony is being dicks about this.

A friend of mine built the hardware that google originally ran on.

Ten years or so ago he took me (and my dogs) on a tour of the place. The room that housed the hardware looked a lot like the photo in this post.

I suspect it looks a lot different today!