I note with gastronomic awe that a number of world records have recently been set for the largest food item (in a number of categories). My attention was drawn initially by a report of the world's largest burger, cooked just yesterday.

Ted Reader set a sizzling mark Thursday by creating a hamburger at Yonge-Dundas Square in downtown Toronto that tips the scales at 268 kilograms, or 590 pounds. If someone were to chow down the equivalent of the colossal creation in quarter-pound portions, he or she would have to devour 2,360 burgers.

If the mark stands, that would make mincemeat of the previous Guinness World Record of around 84 kilograms, or 185.8 pounds. However, Reader says they still have to wait for Guinness to give them the official nod that they’ve claimed the biggest burger crown, which he anticipates will take a couple of weeks. 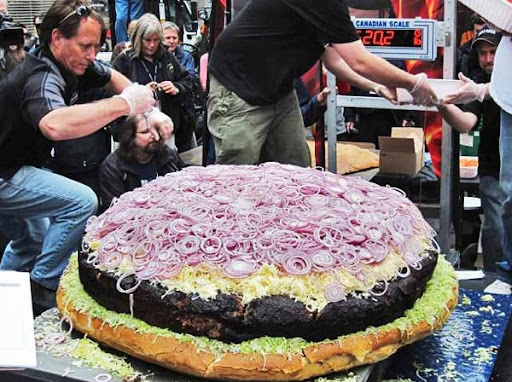 The award-winning chef used a specially designed grill with a built-in forklift mechanism designed to flip the oversized culinary creation.

Reader says it took six hours to cook the behemoth of a burger, starting off with a patty weighing 139 kilos [306 pounds]. The grilled patty was then nestled in a 48-kilogram [106-pound] bun, dressed with lettuce, cheese, tomatoes, red onions, pickles and barbecue sauce.

“I’m amazed that we got it out of the grill and onto the bun,” Reader says. “That was the whole trickiness to it, but it’s held together, it’s edible, it’s delicious.”

Hmm . . . if, as the article claims, one would have to eat 2,360 quarter-pound burgers to equal the new record burger, that gives us a basis for calculation. McDonalds lists the calorie content of their 'Quarter-Pounder' burger as 410 calories. Multiplying that by 2,360, we get 967,600 calories! The normal daily calorie requirement for an average, moderately active male is about 2,500; so that translates into over 387 days worth of calories in the new record burger - more than a year's intake!

Impressed, I looked for other recent record-size food items. They weren't hard to find.

In Italy, chefs cooked up the world's largest asparagus omelet.

Cooks in Canino, Italy, used 100 kilos of asparagus in the recipe and used seven litres of olive oil to fry the six foot wide creation in a giant pan. 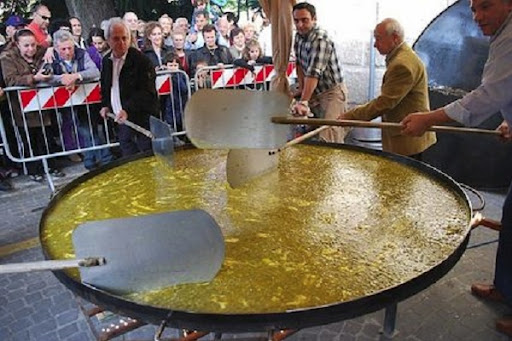 Then - after its dimensions had been verified by Guinness World Records officials - they cut up the smack to serve it it spectators.

"It was delicious and it's quite something to have eaten part of a world record," said one fan.

Not to be outdone, Romania has produced the world's largest peasant omelet.

Master Chef Stefan Bercea and his team of 19 Chefs made an omelette that weighed 3.75 tonnes (8,267 lb) and has 223,02 square feet (20,72 square meters)-setting the world record for the Largest Peasant Omelette during the 3rd edition of the "Selgros International Open Air Cooking Championship" in Bucharest. 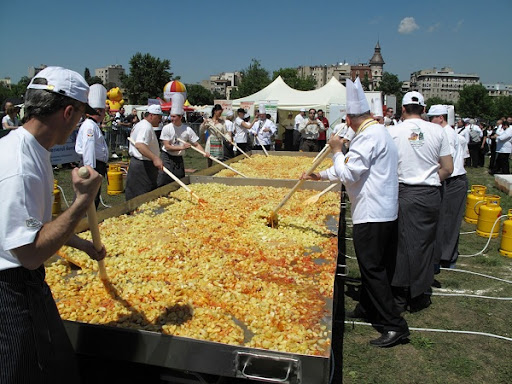 The giant pan used to cook the Largest Peasant Omelette was lifted into position with a crane.

Once done, the giant omelette was enjoyed by everyone visiting the "Selgros International Open Air Cooking Championship" in Bucharest.

An omelet weighing over four US tons??? That's a lot of eating, right there! Here's a video of the making of the omelet. I had to laugh at the number of gas cylinders fueling burners under the outsized frying-pan they used.

Next, the world's largest plate of nachos was produced by Northstar Church in Frisco, Texas.

Frisco’s Northstar Church welcomed 355 teens and their parents to build a 3,555 pounds, 48-foot-long tray of nachos loaded with chips, cheese, salsa and jalapenos - setting the new world record for the Largest plate of nachos. 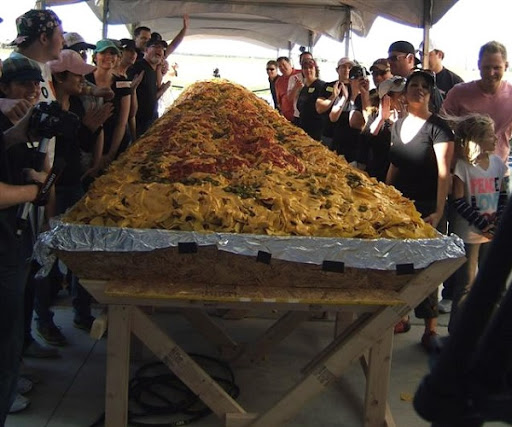 After the chips came the nacho cheese, the picante sauce and the jalapenos. Then came the heat lamps borrowed from local auto body shops to cook the concoction. The final weight: 3,555.25 pounds.

Last but not least, also from Texas, we have the world's largest chicken-fried steak.

The Cowtown Diner is boasting the “Full O Bull”: a four-pound slab of top round, that, after being coated in panko crumbs, deep fried and slathered in cream gravy, weighs about ten pounds, runs $70 and packs a whopping 10,000 calories - setting the world record for the Largest Chicken Fried Steak.

The world's largest chicken fried steak, a 64oz, gravy-slathered slab of tenderized top round runs $70, or $.00 if you actually take it down solo. Because no steak's complete without sides, the Bull isn’t considered finished until you also stuff in 6lbs of mashed potatoes and 10 slices of Texas toast. 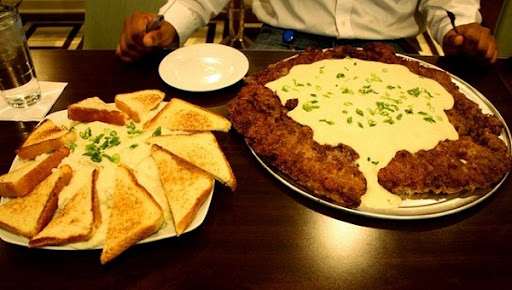 On the plus side, unlike the 90 minutes allotted some grudge-match eating deals, there's no time limit: you've literally got from 7am opening 'til 2am closing, and if you fail, they offer the consolation prize of doggy bags.

The Cowtown Diner started serving the world's largest chicken fried steak when it opened in January. Since then, the restaurant has dished up about 15 orders of the bovine behemoth complete with sides: six pounds of mashed potatoes and ten slices of Texas toast.

How many fat grams are packed in such a preposterous meal? "We were afraid to calculate that," said Scott Jones, owner of the Cowtown Diner.

"We also didn't want to figure out the Weight Watchers points."

So who eats this thing? According to Jones, just about everyone. "Couples, groups of four," he said. "I had a table of six college guys try one the other night, and they had to take the rest home in a doggy bag."

Ordering a day in advance is required, as the world's largest chicken fried steak takes 45 minutes to prepare, starting with whole milk-bound breading that requires the chef to roll the meat up like a carpet to flip; then it's off to a flat grill for a hot-oil splash bath, a searing session aided by a steel pizza shovel, and a 10-min convection-oven bake to ensure even cooking.

Including the XL pizza pan it's served on, the finished protein planet weighs 9lbs and measures 14in in diameter; to up the ceremony, the chef and a procession of servers actually carry it like the Ark of the Covenant to your table.

After reporting all those gargantuan gustatory gizmos, you'll forgive me if I don't feel hungry for a while, won't you?

yes,
its a population explosion that has lead to famine.

what a wonderful world we inhabit. now tell me, where do all the sky is falling people come from?

you really have to admit, for the most part, civilization hasn't done too bad.

And I thought I has jammin' when I made the 24 egg asparagus and crawfish omelette for the parish potluck! It only used about a kilo and a half (that's a little over 3 pounds in real money) and about a kilo of crawfisn tail meat. Maybe it is a record for that recipe. BTW, "Peasant omlette" translates to "scrambled eggs".
Hey, I FLIPPED mine - I didn't fold it. Try that, froggies!