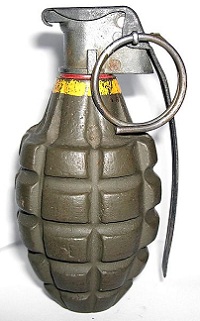 The bomb squad was called early Tuesday morning after a man pulled the pin on a World War II-era grenade, according to Volusia County sheriff's deputies.

The man was given the pineapple-style grenade by a neighbor, who used the explosive as a bookend, deputies said.

When deputies arrived in the DeLand neighborhood, they found the man, who told them he had pulled the pin on the grenade, put the pin back and placed the grenade outside.

The man told deputies his neighbor had a second grenade.

That woman told Local 6 the grenades belonged to her deceased husband, who fought in World War II, and were used as bookends for several years.

Deputies called in the bomb squad, who took both grenades to a nearby field and detonated the explosives, deputies said.

There's more at the link, including a video clip of the incident.

Why is it that so many veterans seem to bring back high-explosive souvenirs of their military service? Of all people, they should know better!

Getting a tattoo, risky depending on sanitation.

Bringing home a frag grenade at all, and then giving it to someone who doesn't appreciate its function? Stupid, stupid, stupid.

Sort of reminds me of the axiom that Romanians oil their rose gardens. Boy Scout motto is "Be Prepared". Seems there was a heck of a lot of WWII hardware hiding all over, and made appearances shortly after Ceauşescu was deposed.

Or maybe he had fond memories like this man:

Still, not the smartest thing to do. http://www.youtube.com/watch?v=pMJQNc3xTsY

He pulled the pin!!!! What was he thinking?

Always had to remind people to not pick up unexploded ordnance. It's a self correcting problem, but the paperwork is a killer.

Greetings from Texas,
I have encountered a number of things like this over the years. Folks calling me and saying "We were cleaning out Dad's or Grand Dads house and found something... Could you come over?"

Several grenades have turned up. More than one has been hot. At this time I would point out that the vet in question didn't give anyone anything, he died. His wife gave the grenade away.

If they don't have blue paint on them, check the bottom to see if it's been drilled. If not, either unscrew he spoon handle or put it down and call somebody. Pulling the pin? Idiot would be an insult to the entire idiot community.

As to who would bring such a thing back, Cut the guy some slack. These young men were pulled out of their lives, trained to be the pointed end of he stick, and dropped into hell. The last part more than once if they survived the first time.

Then the war is over. Go home, just forget the last few years. As for Automatic weapons and grenades, you can't be trusted with such things anymore so don't even think about it.

Before anyone tells me that's not the way they were treated, I have heard varations of this from vets ranging from WW2 to Viet Nam from all services and theaters. There's nothing like daring a vet to smuggle home such things.

Some actually felt they needed such things. Others just wanted souveniors and balked at being told they were no longer entiled to have them by rulemakers who had never been shot at. That last part is a much cleaned up quote.

Perhaps not the wisest course of action, but I would point out it isn't the vet who are doing dumb things with such items. Often it's family finding things the vets forgot they had before they died.

Arthur at 11:21 just reminded me that I slept better with a Big Old Knife under my pillow until the hypervigilance subsided.

Greetings from Texas,
Ain't it the truth Robert. How many years did it take you?