The economy: time for the Micawber prescription?


I've written many times about the abysmal state of the US and world economies, and the likelihood that we haven't yet seen the bottom of the current recession.

Nothing's changed in the new year. Here are just a few recent developments and points. Click on the links provided to see the source articles and references.


1. Baby Boomers start to retire this year - but we can't afford them.

On January 1st, 2011 the very first Baby Boomers turned 65. Millions upon millions of them are rushing towards retirement age and they have been promised that the rest of us are going to take care of them.

Only there is a huge problem. We don't have the money. It simply isn't there. But the millions of Baby Boomers getting ready to retire are counting on that money to be there. This all comes at a really bad time for a federal government that is already flat broke and for a national economy that is already teetering on the brink of disaster.

2. 2011 is going to be another ugly year for America's middle class.

... there are some very serious long-term economic trends that are absolutely ripping apart the U.S. middle class. For example, did you know that even though our population has been growing at a brisk pace we have lost about ten percent of our middle class jobs over the past decade? The vast majority of jobs that have been created have been low paying service jobs.

We now have hordes of highly educated young people that are waiting tables and that are welcoming customers to Wal-Mart. Without good paying jobs there is no middle class, but today American corporations are actually creating more jobs overseas than they are inside the United States. This has helped pad the profits of the big corporate fatcats, but it has been devastating for middle class communities across the United States.

Every time a factory gets closed down in America and gets set up in some other country instead, it means that the U.S. middle class is shrinking just a little bit more. The new "global economy" has been good for the bottom line of the largest U.S. corporations, it has been great for countries like China and India, but it is absolutely wiping out the U.S. middle class.

3. Government spending must be reined in, or catastrophe will follow.

Senate Republicans' "Dr. No" spending hawk warned Sunday that America would experience "apocalyptic pain" with between 15 percent and 18 percent unemployment and that the middle class would be "destroyed" if it didn't get its fiscal house in order.

"If we don't fix the problems in front of us everybody's going to pay a significant price," Sen. Tom Coburn (R-Okla.) said on "Fox News Sunday."

Coburn warned of the United States ending up like Greece or Ireland if austerity measures aren't taken, or like Spain, Italy or Japan, which are in danger of similar financial collapse.

"There's well over $300 billion a year that I can lay out for you in detail that most Americans believe we should eliminate," he said, though it "remains to be seen" how much the 112th Congress will slash.

Everything should be on the table for cost-cutting, the senator said, stressing that the U.S. needs to make those decisions before measures are forced on America by the international business community.

Coburn said that about $50 billion a year could be cut without "truly" affecting anyone by eliminating repetitive programs and bureaucracies, such as 105 separate programs encouraging science and technology careers.

(Let me say at once that this is not a partisan political issue. Senator Coburn happens to be Republican, but anyone with an iota of economic sense realizes that he's stating the facts as they are. Anyone reading the numbers for themselves, rather than allowing biased, doctrinaire, special-interest sources to dictate what they think about economics, will know this.)


4. The USA's credit rating is in danger due to Government deficit spending.

Moody's Investors Service said in a report on Thursday that the U.S. will need to reverse the expansion of its debt if it hopes to keep its "Aaa" rating.

"We have become increasingly clear about the fact that if there are not offsetting measures to reverse the deterioration in negative fundamentals in the U.S., the likelihood of a negative outlook over the next two years will increase," Sarah Carlson, senior analyst at Moody's, said.

Separately, Carol Sirou, head of Standard & Poor's France, told a Paris conference on Thursday that the firm couldn't rule out lowering the outlook for the U.S. rating in the future.

"The view of markets is that the U.S. will continue to benefit from the exorbitant privilege linked to the U.S. dollar" to fund its deficits, Ms. Sirou said. "But that may change."

However, Ms. Sirou, who has an administrative role and has no say in sovereign ratings, was mainly reiterating statements the agency has made in the past. She specifically referred to a comment more than two years ago by John Chambers, chairman of S&P's sovereign-rating committee, suggesting that AAA ratings can always be changed.

The U.S. currently has the highest possible credit rating and a stable outlook at both raters, but both have warned repeatedly in recent years that the government's long-term budget headaches must eventually be addressed.

5. US housing prices have dropped more in this recession than during the Great Depression of the 1930's.

Home prices fell for the 53rd consecutive month in November, taking the decline past that of the Great Depression for the first time in the prolonged housing slump, according to Zillow.

Home prices have fallen 26 percent since their peak in 2006, exceeding the 25.9 percent drop registered in the five years between 1928 and 1933, the housing data company said in a report on Monday.

Many economists expect further price drops, even if there are some anecdotal signs of growing demand, such as in pending home sales data.

6. Housing, formerly one of the major areas of economic activity in the USA, can't help us exit this recession.

A hundred years ago, people used to buy homes with cash. Then we moved to 20% down payments and during the housing bubble we had people borrowing 110% of the purchase price to pay for the home, plus closing costs. These people were NOT home owners. If you borrow 110% or 100% to buy something, you don't have any EQUITY in it. They were renters with the option to buy. People could kick and scream and cry all they want that their beloved home is being taken away from them, but it wasn't their home to begin with.

Why does this matter? It matters because traditionally housing & autos (cyclicals) help lead us out of a recession. Don't expect help from the dead housing sector. The economy is improving, but housing will stay weak.

We have a foreclosure crisis, a large number of delinquencies, and over 25% of mortgage holders under water.

The housing market is on life support and there is more pain ahead. Who is John Galt?

Economists at Bank of America Merrill Lynch say one key to a jobs recovery is an improvement in housing -- because so much job creation is driven by new businesses that have in recent years been financed in part by home equity borrowing.

This sort of job creation has been missing the last couple years, thanks to the housing crash. If U.S. house prices embark as expected on a new decline, the long-awaited hiring renaissance could be put on hold yet again.

"There has been an adverse feedback loop where low home prices lead to tight credit, hurting jobs and prolonging the housing recession," writes economist Michelle Meyer.

A recent study by the Cleveland Fed found that at least a quarter of small business owners in 2007 used home equity to finance their business. With as many as 1 in 4 homeowners under water on their mortgages, many would-be employers are unable to borrow as they were during the boom.

8. The Atlantic has published a remarkable and very informative graphic, showing how the current recession has changed our economic status and spending habits in only two to three years. The graphic's too big to reproduce here, so I'll show you a small section of it, just to whet your appetite. 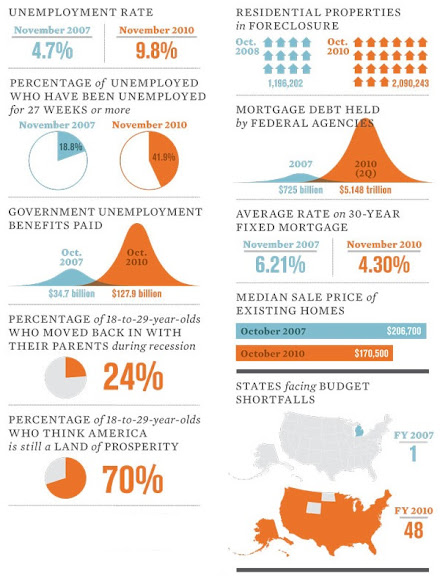 
Under the circumstances, for individuals, families, cities, States and our nation as a whole, I can only recommend very strongly the economic prescription of Mr. Wilkins Micawber, from Charles Dickens' 1850 novel 'David Copperfield':

For those who aren't familiar with pounds, shillings and pence, Wikipedia notes:

If we'd followed that prescription in years past, we'd never have gotten into this recession in the first place.

Only there is a huge problem. We don't have the money. It simply isn't there. But the millions of Baby Boomers getting ready to retire are counting on that money to be there. This all comes at a really bad time for a federal government that is already flat broke and for a national economy that is already teetering on the brink of disaster.

As one of those Gen Xers who is getting stuck with the bill, I'd like to point out that it was the Baby Boomers who spent all the money, created all the entitlement programs, and now expect me to pay for them to be retired for the next 30 - 40 years.

I give you three guesses how close I am to saying "hey, fuck you", and letting them all go hang, and the first two don't count.

Er, not quite, Wiki. Care to try again?

Actually, Leatherneck, Wikipedia is right - but they're talking about old pence, not new pence. Six new pence would equate to a shilling, but six old pence is, indeed, sixpence less than a pound.

"Coburn warned of the United States ending up like Greece or Ireland if austerity measures aren't taken, or like Spain, Italy or Japan, which are in danger of similar financial collapse."

Aw, fuck. There goes Plan B.

perlhaqr (whom I know and respect from other blogs, so this isn't addressed to ph in particular) raises another really bad trend in this economic morass you portray: an increasing chance for generational warfare.

The viewpoint he expresses is rather common, and like most social generalizations, is not necessarily true. Not all boomers have lived the way he thinks and the attitude of "gimme freebies from the government" is not unique to any generation.

But when the young guy comes to "kill all the old boomers", he's not going to wait for you to show him how frugally you've lived. My wife tells me that when I told her that social security wouldn't be there for us and we needed to be saving like crazy, I was the first person she ever heard that from. That was in in 1982.

There are many reasons why we were due for an economic slowdown as the 21st century opened. It didn't have to be this bad, and I maintain it has been this bad because of the actions of the Federal Reserve and the Fed.gov leviathan.

Part of the reason for the loss of the middle class is the lawyers and the treehuggers. the lawyers make operations here in U.S.A. expensive and the treehuggers like the idea of all industry to be out of the United states. Also the spending has to be controlled. Once we get spending under control, and a lot of these BS programs rolled back, we can get our fiscal house in order. I do have doubts if we can, we as a society have gotten used to the gov't gravy train and people will not want it to stop. People do not have a sense of self sacrifice anymore, it is all about them.