Another hero leaves us


I was saddened to read today of the death of Knut Haugland. The Telegraph reports:

Knut Magne Haugland was born on September 23 1917 at Rjukan in the Norwegian province of Telemark. After qualifying as a military radio operator, in 1940 he saw action against the Germans near Narvik as part of the Norwegian campaign. 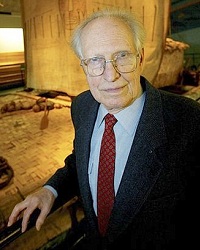 After the Germans had overrun his country, Haugland found work in the Hovding Radiofabrik in Oslo, where he started covert work in the Norwegian resistance movement, but in August 1941 he was briefly arrested by Quislings, escaped and fled via Sweden to England.

Haugland joined the so-called Norwegian Independent Company, formed to carry out commando raids in occupied Norway, which became one of the most decorated military forces during the Second World War.

He was selected by the Special Operations Executive (SOE) to train with three others for Operation Grouse, the raid on a hydroelectric power station near his hometown where the Allies suspected that heavy water, a key component in the atomic weapons process, was being produced in order to build a Nazi atom bomb.

He parachuted with three others onto the Hardangervidda plateau on October 18 1942. But a planned rendezvous with British engineers never materialised after the Britons' gliders crashed and the survivors were tortured and executed.

As a result the Germans were alerted to Allied interest in heavy water production, but Haugland was ordered to wait on Hardangervidda, where his team subsisted on moss and lichen and, just in time for Christmas, a wandering reindeer. In sub-zero temperatures he kept in contact with the British using a radio to which he improvised spares using a stolen fishing rod and an old car battery. Every night at 1am he would make contact, often unable to control the chattering of his teeth, using the password "three pink elephants".

It was February 1943 before Operation Gunnerside (named after a grouse moor owned by Sir Charles Hambro, head of SOE) was mounted. Six Norwegian commandos were dropped by parachute, and after a few days' search, met up with Haugland for a new assault on the hydroelectric plant.

The heavily defended plant was now surrounded by mines and floodlights and accessible only across a single-span bridge over a deep ravine. The Norwegians climbed down the ravine, waded an icy river and climbed a steep hill where they followed a narrow-gauge railway and entered the plant by a cable tunnel and through a window. In the ensuing sabotage hundreds of kilograms of heavy water was destroyed. Though 3,000 German soldiers searched for the saboteurs, all escaped. The Nazi heavy water project never recovered.

Haugland hid on Hardangervidda for two months before going to Oslo to train radio operators for the Norwegian resistance. Despite being known to the Gestapo, he twice used the clandestine sea crossing known as "the Shetland bus" to reach Scotland. In autumn 1943 he visited London for supplies and training in new code techniques and returned by parachute.

In November 1943 he was arrested, only to escape, and his luck and courage held firm again the following year, when, on April 1, one of his transmitters, hidden inside a chimney at the Oslo Maternity Hospital, was located by direction-finding techniques. "The whole building was surrounded by German soldiers with machine-gun posts in front of every single door," Heyerdahl wrote later. "The head of the Gestapo was standing in the courtyard waiting for Knut to be carried down.

"Knut fought his way with his pistol down from the attic to the cellar, and from there out into the back yard, where he disappeared over the hospital wall with a hail of bullets after him." On the run, Haugland managed again to escape to Britain and did not return until war's end.

Haugland was twice awarded Norway's highest decoration, the War Cross with Sword, and was awarded the British DSO and MM, the French Croix de Guerre and Légion d'honneur, and, postwar, the Royal Norwegian Order of St Olav.

Do note the last paragraph above. The War Cross with Sword was Norway's highest military honor for valor in action - that country's equivalent to the US Medal of Honor or Britain's Victoria Cross. Haugland won it twice. That takes an awful lot of courage . . .

After the war, Haugland was a member of the crew of Thor Heyerdahl's world-famous Kon-Tiki Expedition. 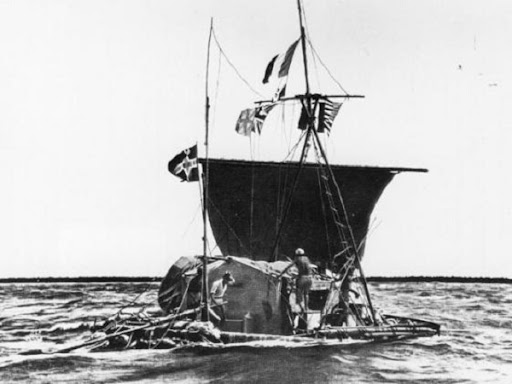 Returning to Norway, he continued his career in the military, retiring in 1983 in the rank of Lieutenant-Colonel. He also served as Director of the Kon-Tiki Museum in Oslo, Norway.

Not many people are truly, genuinely heroes. Knut Haugland qualified for that title many times over. I had the privilege of meeting him at the Kon-Tiki Museum some years ago, and was profoundly impressed by his gentlemanly demeanor. The world is a poorer place for his passing. God rest him.

There are at least 5 movies that could be made about his war exploits!! I'm very impressed.

And I again thank the powers that the Nazis were after a fusion bomb and not the atom bomb, or they might have gotten it before we did.

Then again, if they had they'd have probably bombed Moscow and Leningrad first...