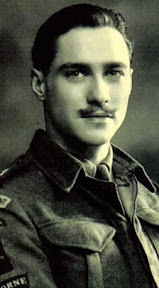 I'm saddened to hear of the death of the British actor, Richard Todd.

He played in many war movies during the 1950's and 1960's, and I recall seeing him in many of them. The big difference between him and many other movie actors was that he fought right through World War II, and in a very heroic role indeed - as a paratroop officer. He was one of those who dropped into Normandy on the night of June 5/6, 1944, immediately before the dawn of D-day, to secure the bridges across the Caen Canal and the Orne River in the British sector of the bridgehead. His unit reinforced that of Major John Howard, who commanded the operation. Fittingly, Todd was to play Major Howard and re-create the seizure of the bridges in the classic war film 'The Longest Day'.

Rest in peace, Mr. Todd, and thank you for the memories you recreated for so many of us.

Not to mention Guy Gibson in "The Dam Busters".