Two quad bikers were killed by a train yesterday morning while allegedly using a main rail line as a getaway route from a £40,000 superstore break-in.

Suspected burglars Trevor Davies, 20, and David Cooper, 27, died instantly when the powerful quad bike was struck in the darkness by a passenger train. 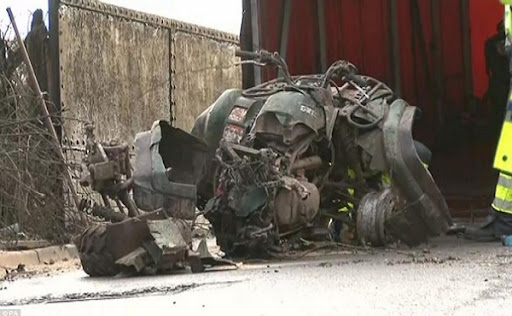 The deceased's quad bike after being struck by the train

Two other men riding another quad bike were also hit by the train - but were not injured and escaped on foot from the rail-line.

The pair were killed just minutes after a 4am raid on an outdoor pursuits superstore next to the main London to South Wales rail line in Cardiff.

A gang of four had ridden down the rail line, used bolt cutters to get through fencing and then used quad bikes to ram-raid the doors.

A haul of £40,000 worth of quality sporting and ski jackets were taken from the GO Outdoors base on busy Newport Road in Roath, Cardiff.

The quad bikes were seen on security CCTV cameras as they fled back onto the rail line in a bid to escape.

The main line is normally deserted at 4am - but the unscheduled empty train was travelling at 70mph on its way for a service.

The sound of the train was drowned by the engines of the quad bikes as the four rode on the four-lane track at nearby Rumney just half a mile from the store.

The train driver saw their quad bikes too late to stop. One machine was crushed by his engine and the other pushed off the track.

Both Mr Davies and Mr Cooper were found dead on the scene from multiple injuries.

A spokesman for GO Outdoors said: 'Some 200 branded technical men's jackets worth £40,000 were stolen.

'The store's extensive security and surveillance systems have delivered video footage which has since been supplied to police.'

It is understood the haul of stolen jackets was later retrieved by police near the railway line.

Two other men fled the scene and were yesterday being hunted by police investigating the tragedy.

One has to shake one's head in disbelief. The whole point about railways is that one NEVER knows when a train may come along! Timetables aren't a reliable indication - delays can hold up trains, or unscheduled traffic may be sent to take advantage of quiet periods, as happened in this case. To blithely assume that one can make one's getaway on a deserted railway line is just asking for trouble . . . as the thieves in this case found out!

I shudder at the thought of the laws Airship One will come up with as a result of this.

What a waste of a perfectly good Quad Bike.