Enterprising, inventive, but not on the timetable!


Six train fans in Germany are in hot water after their latest escapade.

Train buffs are facing jail after building their own ramshackle locomotive and taking it on the public rail network.

The six-seater train - made out of garden furniture and salvaged train parts - was powered by an electric motor and even had its own refreshments car in the shape of a crate of beer. 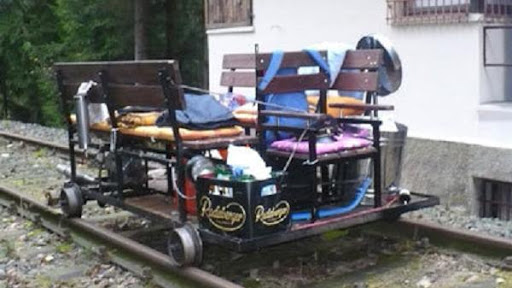 Police in Erfut, Germany, were alerted after residents of properties adjoining the railway spotted the unorthodox vehicle - and were aware that there should have been no traffic running.

Police however had to call in a helicopter to find and follow the makeshift train as the police cars could not follow it along the tracks.

The helicopter pilot was able to radio ahead to other officers who set up a makeshift barrier at a station to stop it.

Railway bosses had been asked to suspend all services to avoid a collision although the train buffs had chosen to have their drive when there had been no trains scheduled.

"It seems to be one of those mad pub ideas that actually happened. They didn't seem to realise they could have caused a serious accident if they'd got anywhere near a real train," said one officer.

F for planning? They checked the train schedule, didn't they?

Really! An F for common sense, maybe, but not for planning.

In parts of the US, people have built bicycles with a third wheel to run on abandoned railroad tracks. There's great scenery, and no traffic. The railroads do not approve, probably thinking that sooner or later, someone will get on to a working track.

Generally small vehicals like that are not senced by the signal systems. Not all trains are sceadualed. Sounds like a perscription for a Darwin moment.