A mischievous best man has rigged a newlywed couple’s bed so that every time they have sex, a sensor informs the world via Twitter.

The British prankster claims the practical joke was ‘payback’ for when the groom ‘stitched me up something rotten when he was my best man’.

He set up a system by putting a sensor pad under the marital mattress while the newlyweds were on their honeymoon.

Now every time there’s increased activity up top, the bed reports it once the deed is finished a Twitter page called 'newlywedsontjob'. 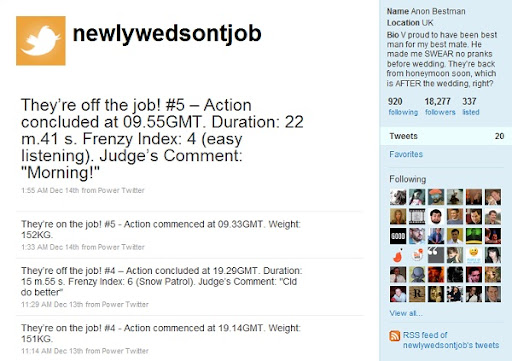 The summary on the social networking site includes notes on duration and a ‘frenzy index’, along with a judge’s comment such as ‘Could do better’.

The anonymous best man ... promised not to play any jokes on his ‘best mate’ either before of during the wedding.

But pranks after the wedding are apparently fair game for this prankster, who only gives his location as ‘UK’.

He promises that he will never reveal who he is or the identity of the couple,adding: ‘I figure I’ll tell my mate in due course that he’s had an audience.’

I'm not sure what I'd do to anyone who 'pranked' me in that fashion. Suffice it to say that it'd be painful and spectacular enough to warrant another Twitter channel all of its own!

think i'ld prefer this (as long as it remains anonymous) to the prawn heads in the hub caps ...

Payback. . . .
Breaking of every finger, one by one, slowly and painfully, comes to mind. . . . .
Or possibly kneecaps, so that the prankster can't kneel down to prank again.

My parents told a story of a sensor installed in the bed at an apartment owned by newly-married couple. (Back in the dark days before networked computers...)

The sensor was a simple electromechanical mechanism, which triggered a timer rigged to the doorbell.

I guess that's what happens when you have a bunch of bored engineering students talking about possible pranks while the couple is out on their honeymoon.