The Daily Mail reports that fossil-hunting is becoming big business, and causing a lot of damage to areas where such things may be found.

We pick our way along Monmouth Beach, an untidy strand just to the west of Lyme Regis on the Dorset-Devon border.

Every few minutes, boulders the size of my head tumble gently down the cliff, dislodged by wind and rain. Monmouth beach will not win any beauty contests, consisting as it does of slimy limestone slabs, rusting ironmongery, and coal-black cliffs, but to a growing number of people these rocks are beautiful - as a source of serious cash.

For not everything precious glisters like gold, and at 9am on this miserable morning, a handful of figures in muddy waterproofs, faces contorted against the rain, are already bent over the rocks, hammers in hand. 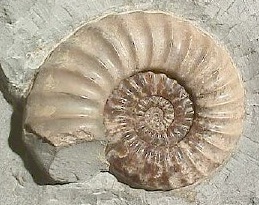 And soon we see what they are looking for: a set of lovely whorls in a slab of limestone, each the size of a car wheel. These are giant ammonites, the extinct snail-like shelled cephalopods, which once sailed through Jurassic seas like stately prehistoric galleons.

'This is, quite simply, the finest unbroken record of the Age of Dinosaurs anywhere in the world,' says Richard Edmonds, geologist and chief scientific officer for the Jurassic Coast, a world heritage site since 2001, which runs from Exmouth to Studland. The rock strata of this remarkable 95-mile stretch of coastline encompasses 180 million years of the Earth's history.

A little further on, we spot a much rarer fossil, this time part of an ichthyosaur, a dolphin-like extinct marine reptile from the Jurassic period. For all we know, a complete 10ft sea monster could be lurking in the rock. If there was, and if I had the skills and kit to dig it out, it would be worth a fortune.

Because fossil-hunting is big business. Fossils - the remains of dead organisms preserved in rocks - can fetch millions.

As one dealer told me, 'The serious money knows modern art may go out of fashion. But put a dinosaur skeleton in your hallway and the wow factor will always be there.'

Scientists are increasingly concerned that the lucrative market in dinosaur remains is driving a booming illicit trade in fossil poaching.

Many experts claim that these irreplaceable ancient treasures, which are vital for our understanding of Earth's history, are ending up not in laboratories or museums but on the walls of business HQs, Russian oligarchs' mansions and even, in one case, the bottom of a Japanese billionaire's swimming pool.

To many scientists, this poaching of fossils is every bit as bad as the poaching of live species - and should be punished accordingly.

Here, in Britain's fossil central, a battle has erupted between the National Trust, which owns these cliffs, and one particularly determined commercial fossil-hunter, a 'cowboy' according to all concerned, who carts away huge chunks of cliff face.

He is one of a small army of professional collectors whose finds end up in expensive boutiques all over the world and who use heavy equipment, even explosives, to excavate their booty.

On the Jurassic Coast, a fossil-collecting code allows the removal of fossils provided the cliff-face is not damaged, and the code requires rockhounds to notify the authorities only if a particularly important find is made.

A few weeks ago, one of the most spectacular discoveries ever made in the UK made the news - a gigantic pleiosaur skull, unearthed further east along the Jurassic Coast near Weymouth by an amateur fossilhound called Kevan Sheehan. 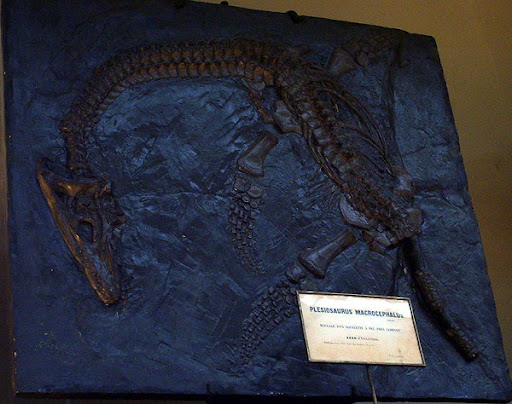 The 'Dorset Sea Monster', as it was dubbed, was so huge (about 60ft long) that, when alive, it could have gobbled up a T-rex for breakfast.

But the ancient leviathan would never have come to light without five years of painstaking, and backbreaking work, as, bit by bit, the gargantuan skull slowly eroded out of the rock in which it had been entombed for more than 150 million years, and was finally chiselled out of its resting place. And yet more work to carefully 'prep' the fossil, using tiny picks and tools to expose the delicate filigree of bone and preserved tissue.

'We paid Kevan £10,000 for it, out of the Heritage Lottery Fund, and it will end up in Dorchester Museum, as he wanted,' says Edmonds.

'That sounds like a lot, but it's actually peanuts. These scientists complain, but as the collectors say, you never see them out on the rocks in all weathers looking for fossils.'

'I just do this for fun,' says Mr Sheehan, who is a full-time carer for his mother. 'I certainly don't make a living out of it. I'm satisfied that someone will be able to make better use of this fossil than I can.'

'One of our dinosaurs is about to go missing,' screamed one report, amid claims that Mr Sole was about to sell the unique fossil for £100,000 to a Japanese collector.

Mr Sole, 66, whose home is packed to the rafters with hammers, rocks and fossils - says the story was rubbish. 'I was always adamant that it remained not only in the UK but in the West Country. And it is now in Bristol Museum,' he says.

David Sole is lucky to be working in Britain. 'If you did what I do in France, you would get your collar felt,' he cheerfully admits.

In the US, where fossil-hunting is a major industry, one collector recently spent two years in prison for selling fossils worth just £62.

Peter Larson, who discovered two famous South Dakota T-rexes, nicknamed Sue and Stan, remains bemused at his treatment. His Black Hills Institute of Geographical Research discovered Sue in Faith, South Dakota, in 1990. Two years later, Larson, who loved showing local children the skeletons, was raided by the FBI and arrested. The jury threw out all but two of the charges - and neither related to Sue.

'I was found guilty of failure to fill out forms,' he says. 'And for that I got two years jail.'

Larson served his time and is back running his institute and the nearby Black Hills Museum of Natural History.

Talking about the Dorset fossil situation, he says: 'Fossils from that area are classically collected by scientists, amateurs and people who sell. If you don't pick up the fossils when you see them, they will be washed away.'

Larson believes the laws are better in Britain than the US, which can be more antagonistic to private dealers and collectors. 'We call it dinosaur envy,' he says. 'Academics can get annoyed they didn't find the bones themselves.'

Sounds a bit like the Wild West has come to the fossil-hunting business! I've gathered fossils myself, in my youth (trilobites abounded in areas close to my childhood home), and I remember the thrill of discovery. I hope that serious scientific inquiry isn't harmed by those with more mercenary motivation.

Paleontology has always had a bit of a cowboy side to it. Ever read of the "Bone Wars" between Cope and Marsh?