"Making a monkey out of professional photographers" 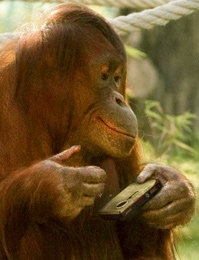 An orangutan is making a monkey out of professional photographers after becoming one of the world's most popular snappers.

Nonja's handiwork has been viewed by tens of thousands of fans after keepers at Vienna's Schoenbrunn zoo in Austria gave her a digital camera and set up a Facebook page for her.

Snaps from the digital camera, which issues fruit treats whenever a picture is taken, are uploaded instantly over a WiFi link.

The slightly blurry images of Nonja's climbing rope, food and her companion's shaggy red-brown fur have won lots of admiring comments from fans.

"It's an attempt to see the world through her eyes and see what she thinks is important. She's very artistic," said one keeper.

Nonja turned to photography after a spell as a painter where her works often reach up to £2,000 at auction.

I love the idea, and it's great that the orangutan is able to use the camera. Her Facebook page is here, with many of her photographs on display.

A keeper's comment, "...and see what she thinks is important" is a bit of a leap of logic via assumption, isn't it?