Anyone for 'minst pye'?


A recipe for mince pie dating back to 1624 has been discovered in England.

Archivists have discovered one of the earliest recorded recipes for mince pies tucked away in the official papers of King Charles I.

In 1624, when the recipe is thought to have found its way into a file of state papers created by Charles's secretary of state Edward Conway, a mince pie contained ingredients only the very wealthy could afford.

Fine cuts of meat, foreign fruits and exotic spices were a luxury far removed from the largely meat-free diet of the poor. 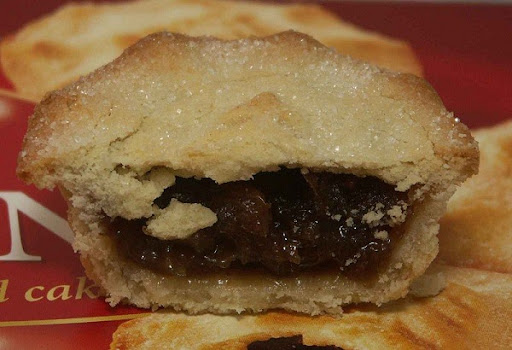 In a spirit of seasonal fun, the Mail gave a two-Michelin-starred chef the task of recreating the 'minst pye' using the recipe from the National Archives.

Marcus Wareing was a little dubious when he first looked at the recipe 'For six Minst Pyes of an Indifferent Bigness' in the kitchens of his restaurant Marcus Wareing at The Berkeley in London.

Loin of mutton was indeed tricky to find, so neck of lamb was used instead. But in other respects the chef remained true to the original and the result was a success.

'I was surprised how good it tasted in the end,' Mr Wareing said. 'It reminded me of something my gran used to do.'

He added: 'I think it's great that something that tastes as good as this is from the 17th century.'

Here's the original recipe, in the language of the day:

For the Paist mingle 1 pound and a halfe of Suger w(i)th the Flower and breake in the Yolkes of six Eggs, then worke it together w(i)th 3 parts of the two pounde of Butt(e)r. Set of a little water, and let it Seethe, then scym it, put in the 4th Parte of the Butt(e)r, when it is melted, Scym it cleane from the Water, work it w(i)th the Paist.

For the Meate. Let it be seasoned w(i)th Pepper, and mingled with halfe a pounde of Suger, the other Frute and Spyce, the Raisons must be stoned, & someof them minced among the meate, the others put in hole, put in the Joyce of two Orringes and one Leamond, and the Ryne of them smale minced.

When the Pyes are filled slice Dates and stick in the top, when you sett them into the oven. Wassh them over w(i)th the yolkes of Eggs, and pynn them upp in Papers.

And here it is, translated into modern terms (with quantities reduced to what's practical for a modern family):

Mix the flour and sugar, yolks and butter and set aside. For the mince mix: mix all of the ingredients together. Preheat the oven to 350 degrees (Fahrenheit - 180 degrees Celsius). Roll out pastry into circles. Place in pie tins, fill with the mince mix and place dates on top. Glaze edges of the bottom of pastry with egg yolk, place smaller circle on top. Place in oven for 15 minutes.

If any reader(s) decide to make 'minst pye' in the traditional style, please post a comment here to let us know how you liked it!