Boeing has announced that its new 787 airliner will make its first flight at 10 a.m. Pacific time tomorrow, December 15th, weather and other conditions permitting. 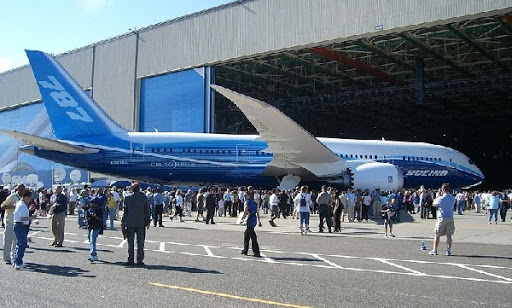 Originally planned for September 2007, the event has been delayed for over two years by manufacturing difficulties, including some major design changes. The 787 will be the first commercial airliner to use composite materials for most of its constructions, so the delays might have been anticipated, but it's still cost Boeing billions of dollars in penalties to its customers and additional expenses.

Here's a video clip of the last-minute high-speed taxi tests of the 787, including lifting the nosewheel off the runway - almost at the point of takeoff, but held back.

I'm looking forward to seeing this long-delayed bird in the air.

It seems to be much easier to look at than an A-380. If Boeing did the design work well, then they should in turn do well with it.

Just watched takeoff. What a cool sight. About time they got this thing off the ground. I was amused at the amount of wing flex. Not normal for a commercial liner but something we see with composites in wind tunnel testing.